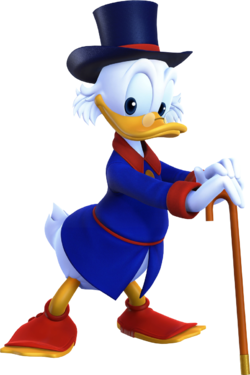 Scrooge McDuck is Donald Duck's wealthy, but stingy, uncle, and a character first introduced in Kingdom Hearts II. The richest duck in the world, he originates from the 1947 comic "Christmas on Bear Mountain", with his animated debut being 1967 Walt Disney Productions short Scrooge McDuck and Money.

Upon returning to Twilight Town's Tram Common after their adventures at the Old Mansion, Sora, Donald, and Goofy run into Uncle Scrooge, who reveals that the little rat they earlier rescued in the forest is actually Little Chef, the cook behind Scrooge's new Twilight Town restaurant, Le Grand Bistrot. Little Chef gifts the trio with a tarte aux fruit as thanks for saving him, as Scrooge explains that he recruited the rat after tasting his incredible food. Little Chef says that he'd like to cook more for the group, so Scrooge encourages them to find ingredients that he can use, a task Sora eagerly agrees to.[1] Later, Hayner and Olette catch up to Sora, Donald, and Goofy and are revealed to be working for Scrooge McDuck, putting up posters to advertise a movie festival for the town that Scrooge is hosting.[2]