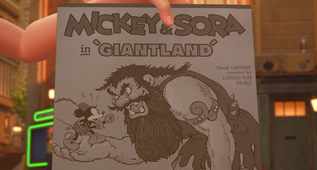 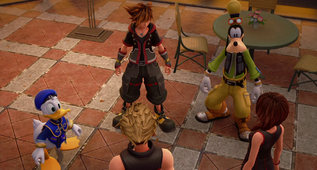 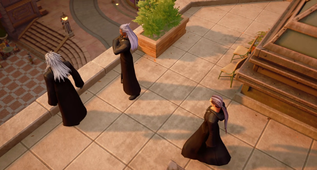 "We'll All Wish" is a cutscene in Kingdom Hearts III. It shows Sora, Donald, and Goofy at the end of their time in Twilight Town as they bid farewell to the residents who have helped them so far.

Outside the Le Grand Bistrot, Hayner and Olette catch up to Sora, Donald and Goofy. The pair are revealed to be working for Scrooge McDuck, putting up posters to advertise a movie festival for the town. Olette teaches Sora how to scan the posters to unlock promotional games on his Gummiphone.

Sora tells the pair about Organization XIII's presence and warns them to keep safe. He also asks them to keep Roxas in their hearts and wish for his return, a favor they promise to fulfill.

High above the town, watching over the group, are Ansem, Seeker of Darkness and Xemnas, who are soon joined by Xigbar. They remark that they'll guide Sora, but if he wavers from their path, they'll destroy him.

Fade in on the sign of the Le Grand Bistrot. Pan down to reveal Sora, Donald, Goofy, and Scrooge McDuck standing around a table. Little Chef is shown standing on the tabletop.

Sora says "Huh?" and Goofy "Oh" as everyone turns towards the voice. Hayner and Olette are running towards them, panting.

Hayner and Olette reach the group and come to a stop. Scrooge emerges from behind Sora.

Sora again says "Huh?" and Donald squawks a "What?".

Goofy: "You guys work for Uncle Scrooge here at the bistro?"

Olette holds up a white tube.

Olette: "He gave us a short job putting up these special posters."

With intrigued hums, Sora, Donald, and Goofy peer at the poster.

The camera pans out to reveal the bottom right corner of the poster, where a small QR code with a cartoon Sora head in the middle can be seen.

Olette: "Hold your phone up to the poster."

Sora aims the Gummiphone camera at the code.

The Gummiphone flashes and beeps. Olette rolls the poster back up.

Olette: "There, you've just downloaded a promo game for the film. You can try it later."

Donald turns to his uncle.

Donald Duck: "You did all this, Uncle Scrooge?"

He turns and walks towards the restaurant.

Scrooge McDuck: "Provide a bit of entertainment, and then give folks a nice, cozy place to relax."

He points his cane at the Le Grand Bistrot's title etched into a window.

He waggles his finger at Donald.

Scrooge McDuck: "They'll all be happy, an' hungry, an' eager to spend their money."

Scrooge chuckles mischievously and turns around to hide his face. Donald frowns, disappointed.

Goofy: "Gawrsh, he sure is canny. I always wondered how he keeps customers comin' into his businesses over and over."

Sora: "Oh, yeah, I'm no business guy, but I sure wouldn't want to be one of Uncle Scrooge's competitors."

Hayner says "Seriously" and the rest of the group laughs.

Sora: "Well, those creepy-crawly things might come back for more, so stay on your toes."

Hayner: "Sure. But don't we have you guys to take care of 'em for us?"

Olette: "You have to leave again?"

With an "Mmm-hmmm", Sora nods.

Goofy: "But we'll definitely be back."

Hayner: "When ya gonna slow down?"

Sora: "I know how Roxas feels. To be lost. But Donald and Goofy...Kairi... brought me back by wishing with all their hearts."

Sora: "So...I was hoping the three of you would do the same, and wish for Roxas."

The camera zooms out from the group to reveal Ansem and Xemnas observing from a rooftop above. A dark corridor opens behind the pair and Xigbar emerges. He crosses the roof to join them.

Xigbar: "Aren't you making it a little too obvious?"

Xemnas: "We were instructed to guide him."

Ansem: "Yes...just look at them. They wouldn't get far if we did not spell it out."

Xigbar: "Fair enough. But let's not forget how many times Sora still managed to rain on our parade."

Ansem: "If he wavers from the path we lay, we destroy him."

Xigbar: "But in that case...we'll have to find ourselves another vessel."

Xemnas: "That is why we never have just one iron in the fire."

We'll All Wish
Retrieved from "https://www.khdatabase.com/index.php?title=Transcript:Kingdom_Hearts_III/Chapter_III:_Twilight_Town/We%27ll_All_Wish&oldid=18759"