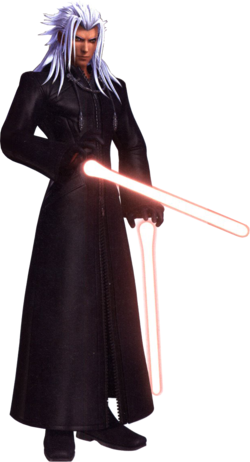 As they emerge from Twilight Town's Old Mansion, Sora, Donald, and Goofy are shocked to find both Xemnas and Ansem waiting to question Sora's efforts to bring back Roxas. Xemnas insists that what Sora seeks is impossible. Goofy, however, notes that both Ansem and Xemnas, who used to be part of the same person, now exist simultaneously and separately, and reasons that since they can do it, Sora and Roxas can too. Xemnas claims that the only way to bring Roxas back is for Sora to submit to the darkness, so he and Ansem summon enemies to challenge him. As the pair leaves through a portal of darkness, they tell Sora to set his heart free, but Sora insists to himself that he won't submit to the darkness as long as he's helping Roxas.[1]

Later, outside the Le Grand Bistrot, Hayner and Olette catch up to Sora, Donald and Goofy. Sora tells the pair about Organization XIII's presence and warns them to keep safe. High above the town, watching over the group, are Ansem and Xemnas, who are soon joined by Xigbar. They remark that they'll guide Sora, but if he wavers from their path, they'll destroy him.[2]