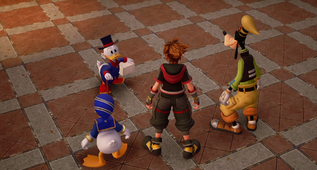 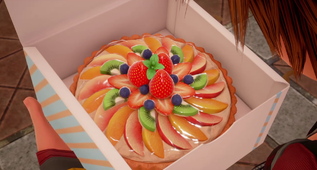 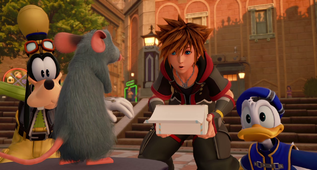 "The Bistro's Little Chef" is a cutscene in Kingdom Hearts III. It shows Sora, Donald, and Goofy meeting Scrooge McDuck and learning of the new restaurant he has opened in Twilight Town with the help of Little Chef.

Having returned to the Tram Common, Sora, Donald, and Goofy run into Uncle Scrooge, who reveals that the little rat they rescued in the forest is actually Little Chef, the cook behind Scrooge's new Twilight Town restaurant, Le Grand Bistrot. Little Chef gifts the trio with a tarte aux fruit as thanks for saving him, as Scrooge explains that he recruited the rat after tasting his incredible food. Little Chef says that he'd like to cook more for the group, so Scrooge encourages them to find ingredients that he can use, a task Sora eagerly agrees to.

Fade in on Sora, Donald, and Goofy running through Twilight Town's Tram Common. Sora is panting heavily. As they near the Alley, a voice calls out, causing Goofy and Donald to each gasp surprise and skid to a stop.

???: "Well, bless my bagpipes! It was you laddies who rescued my chef."

They are revealed to have stopped before the Le Grand Bistrot restaurant. Donald yelps and leans forward. Walking across the terrace is Scrooge McDuck, carrying a white box under one arm. He lifts his cane in a wave.

Sora walks back to Goofy and Donald with a "Huh?".

Goofy: "That's right. But Uncle Scrooge here's what you might call a world traveler."

Donald runs to his uncle.

Sora and Goofy run after Donald. The trio and Scrooge meet in the middle of the terrace.

Sora: "How are ya, Uncle Scrooge?"

Scrooge McDuck: "Oh! Hello, Sora! You're lookin' hale and hearty. I heard ye were on another grand adventure with these two. I hope Donald isn't making a menace of himself."

Donald looks shocked, then slumps over with an "Aw" and shakes his head sadly.

Donald Duck: "Why did you have to say that?"

Goofy: "So, Uncle Scrooge, what's that you were sayin' about a chef?"

Scrooge McDuck: "Och! Right, right. The chef of me bistro here wanted to show ye his appreciation, so he baked this for ye."

Scrooge holds out the box and Sora takes it. Sora hums and examines the box from all sides.

Sora opens the box to reveal a beautiful French fruit tart sitting inside.

Scrooge's hat twitches. Scrooge looks up at it with a confused hum.

Sora is distracted as he notices Scrooge's moving hat. He peers at it with a "Huh?". Scrooge talks upwards, as if addressing his hat.

Scrooge McDuck: "Aye, settle down... The chef wants ye to know it's not a cake, but a tarte aux fruits."

Scrooge McDuck: "Why keep it under my hat?"

Scrooge removes his hat and holds it in front of his chest.

Scrooge McDuck: "May I introduce..."

The rat the trio earlier rescued in the forest jumps down from Scrooge's head, landing on the roof of the hat. The rat gives a greeting sniff of the air.

Scrooge McDuck: "Aye. It all started a little while ago, when I was enjoying one of the best meals of my life."

The rat straightens up and puts his paws on his hips proudly.

Scrooge McDuck: "And when I asked to speak to the chef, I met this wee genius. As it turns out, he wanted to expand his culinary horizons. So, I thought: that's an opportunity. And I financed the whole operation."

Little Chef turns to Scrooge. With his hands he mimes chopping something up, spreading it around, picking it up, and serving it.

Scrooge McDuck: "Ooh, I think he wants to cook some more for ye."

Little Chef nods and puts his fingers together as if pleading.

Goofy: "That'll be fun! Kinda like a scavenger hunt."

Scrooge McDuck: "An' the more the better. The mark of a truly great chef is creating masterpieces out of anything."

Sora: "We'll do anything to try some more of Little Chef's food."

Goofy: "That tarte sure did look scrumptiously delicious."

Sora: "Okay! The ingredient hunt is on."

Goofy and Donald nod. The screen fades to black.