Dark World is seemingly endless and formed from the darkness of people's hearts. Those who find themselves in the Dark World struggle to keep a hold of themselves, sometimes losing their light to the darkness that surrounds them.

The Dark World is an immense ruin of dark rock. The ground is hard and bumpy and large towers of stone grow in all directions, the spaces in between filled with jagged splinters. Cracks split the rocks at random, revealing a bright blue glowing inside.

One of the few differing sections of the Dark World is its ominous beach, called the Dark Margin. Here the ground becomes black sand and the pitch waters rock back and forth on the shore. 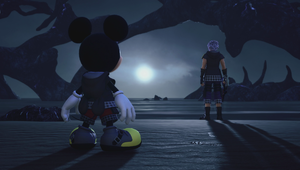 Riku and King Mickey arrive at the Dark Margin.

Riku and King Mickey journey into the Dark World in search of Aqua. Upon arriving, Riku reflects on his past time in the Dark World, remembering how scared he was on his first visit, but how exhilarated and confident he feels being there now. He wonders if King Mickey's presence is the reason for this, but King Mickey insists that his bravery comes from caring deeply about someone, which gives no room in his heart for doubt or fear. Mickey's remarks remind Riku of a promise he made once, though he keeps the person he made the promise to to himself.

Though the Dark World is different to how they remember, Mickey is able to rely on his heart to lead the way to Aqua, though he notes that Aqua's presence is starting to feel dim.[1] Eventually they arrive at the Dark Margin, where Mickey is sad to realize that his trace of Aqua's light has come to an end. Riku recognizes the beach as the place where he and Sora found their way back to the Realm of Light after defeating Xemnas and wonders if Aqua made it out of the Realm of Darkness too. Mickey sadly disagrees, explaining that Aqua has fallen into a darkness through which he cannot see her and he is not sure if they can continue any further.

Before they can discuss their next move, several Shadow Heartless appear and group together to form a menacing pillar of darkness know as a Demon Tower.[2] Mickey and Riku fight and defeat the Heartless, but the Heartless reform and make a sneak attack, swallowing Riku in darkness. As he begins to lose consciousness, Riku hears a voice asking if he needs help, but he is unable to identify the voice before passing out. King Mickey, meanwhile, defeats half the Shadows, prompting the rest to flee, spitting Riku out in the process. Riku awakens to find Mickey unharmed, but the same cannot be said for their keyblades--Mickey's Kingdom Key D has been damaged and Riku’s Way to the Dawn is broken in half. Acknowledging they underestimated the strength of the Dark World's Heartless, Mickey decides they must regroup at The Mysterious Tower before attempting to dive any deeper. Before leaving, Riku sticks his shattered Keyblade into the sand, deciding to leave it behind for someone else.[3]