"An image of the Keyblade unleashing its ultimate power flows into your mind."
Yen Sid's mirror 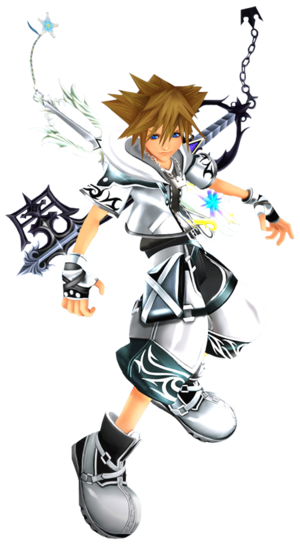 Final Form (ファイナルフォーム, Fainaru Fōmu?) is the final of Sora's Drive Forms in Kingdom Hearts II, which unleashes the Keyblade's true power. Sora gains the ability to obtain Final Form after Sora defeats Roxas at The World that Never Was.

Unlike obtaining other Drive Forms that are obtained through story progression, Final Form is obtained through gameplay. After defeating Roxas at Memory's Skyscraper in The World that Never Was, there's a (3x)3%[1] (which is 9%) chance that Final Form can be unlocked. This will happen at when trying to enter a different form in battle.

Here's the probability that Sora will turn into Final Form after defeating Roxas:

The probability of unlocking Final Form is 0% when the drive gauge is not at 5 or more. Antiform and, by extension, Final Form, requires that Sora be in combat and that neither of the party members are knocked out.

In Kingdom Hearts II Final Mix, the Light & Darkness ability is added, which prevents Sora from turning into any form except Antiform or Final Form. As a result, this increases the chances of Final Form appearing when selecting one of the other drive forms, but only until Final Form is unlocked.

Since Antiform only activates, at most, 25% of the time when using another form, it can be difficult to unlock Final Form. There are a couple of methods that make it easier to unlock Final Form than for it to just show up unexpectedly during the game. Keep in mind that the only prerequisites are that Sora must be in combat, and Roxas must be defeated at Memory's Skyscraper.

While in most worlds, Final Form turns Sora's clothes turn white and a white wave decorates the sleeves and front of the pants. Sora hovers above the ground, and two fading whisps float around Sora while his Keyblades hover and spin crossed behind him. His clothes also pulse with a white glow regardless of what world he is in. When moving, Sora leans slightly forward.

While hovering, Sora slowly descends to the ground, and holds his arms out at his sides while his Keyblades spin slowly parallel to each other in front of him.

While gliding, Sora is parallel to the ground as his Keyblades spin in front of him; he slowly descends closer to the ground in lower-levelled forms of Glide.

In Halloween Town, Sora's clothes remain unchanged aside from gaining the white pulsing glow and the pumpkin mask, which turns into a crown.

In Space Paranoids, the panels on Sora's outfit are white instead of black, and the blue circuit lights turn black.

In Final Form, Sora has the ability to wield two Keyblades, and float across the ground, which is faster than running in his original form. His ground combo consists of three parts:

Magic is powered up through the ability Crime & Punishment. Cure magic is unaffected, but the rest of Magic is changed.

Using this Drive Form costs 5 Drive Gauges and the use of two party members until Sora has reverted back to his original form. If a party member is unconscious or there aren't two party members in the party, Final Form will be unusable--with the exception of the Cerberus Cup, Cerberus Paradox Cup, and rounds 31-40 of the Hades Paradox Cup. With no Guard ability, blocking is limited to Reflect magic, and various movement with the help of Auto Assault. Like all other Drive Forms, Final Form's abilities cannot be unequipped, all action and movement abilities do not carry over to Final Form. Sora loses 10 points toward Antiform every time he transforms into Final Form.

For each Nobody defeated in Final Form, 1 point of experience is gained. This means areas with many weaker Nobodies such as Creepers and Dusks are best for leveling.

In Kingdom Hearts II, the best place to level Final Form is in Naught's Skyway, right after defeating Xigbar and before heading to the second level of Hall of Empty Melodies. From the Save point in Twilight's View, head straight into Naught's Skyway. Activate Final Form after spawning the two Samurai and three Creepers right in front of the door. After using the burst damage from Final Forms activation, finish off the enemies there with magic, then head up the first ramp. In between the first and second ramp a bunch of Creepers should flock toward you. Use either Fire or Thunder to disperse the masses quickly and efficiently. While Magnet can draw in enemies to Sora, it has a high MP cost, and the Creepers will naturally flock to Sora, so using Magnet isn't recommended. Once the Drive Gauge gets close to depletion, head back to the first floor of Hall of Empty Melodies, where the party will be walking around, and your Drive Gauge will be restored as long as you haven't advanced beyond Naught's Skyway. After the all Creepers have been destroyed, head back to Twilight's View to use the Save Point to exit and reenter the world and repeat the process until Final Form is completely maxed out. If the story has advanced beyond Hall of Empty Melodies, using either the Save Point in Proof of Existence or Twilight's View to restore the Drive Gauge is recommended.

In Kingdom Hearts II Final Mix, the above method only works after fighting Xemnas at Memory's Skyscraper. So, instead of the Hall of Empty Melodies being used, the Save Point in Twilight's View or Proof of Existence will have to be used instead.

Another place to level up Final Form is in Twilight Town's Mansion or Mysterious Tower, using the Save Points in White Room and Tower: Entryway respectively.

"Sora can move while executing Infinity, an attack that unleashes the Keyblade's power, so grab nearby enemies! Execute the attacks quickly, or the limit will be canceled!"
Jiminy's Journal, Kingdom Hearts II 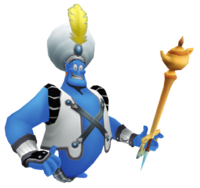 In Kingdom Hearts II, Genie can mimic Sora's Final Form. In his Final Form, Genie gains a white turban with a blue gem with a gray outline beneath a yellow feather on the front. Below the gem is a white headband with black borders. His golden shackles loosen a bit, turn white, and gain black, buttoned straps at both the top and bottom of the shackle. The shackle is tied by two black, crossed laces. Genie also dons a white jacket with short, puffy, black and white-striped sleeves. The jacket has two gray straps that cross in the middle. These are connected by blue buttons with silver arrow-shaped boarders that point along the straps. The beginning of Genie's tail also dons a black, puffy sleeve that matches the ones on his arms. The end of his tail turns into a Keyblade-like weapon, which has a fading gradient from Genie's white tail to a bright gold toward the teeth of the Keyblade. The Keyblade is a long cylinder with a swirly-shaped hilt, brown handle, and teeth in the shape of the magic lamp.

When in Final Form, Genie can use an ability called "Infinity". Selecting "Infinity" in the menu causes Genie to enlarge and swing his fists in front of him while Sora's Keyblades swing around Genie. Then Genie flies in a circle as Sora's Keyblades continue to swing. Using the "Impact" reaction command makes Genie countdown from three with his hands until a bunch of little explosions fill the surrounding area. While Genie is doing this, Sora raises his Keyblade as Genie's Keyblade-esque tail spins in front of it like a timer in tandem with Genie's countdown. When the explosions occur, Sora and Genie cover their ears. Sora disappears for the duration of "Arcana", but reappears during "Impact". Sora is invincible during the entire duration of the Limit. In Kingdom Hearts II Final Mix, if Sora has a Crown equipped, a graphical glitch will occurs where the Crown won't disappear during "Arcana", even though Sora himself does. Genie gains the ability to transform into Final Form as soon as Sora does.