"An image of you obtaining old powers flows into your mind."
Yen Sid's mirror 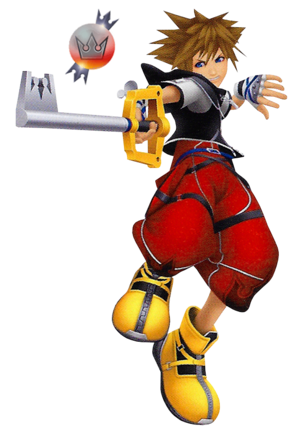 While in most worlds, Limit Form turns Sora's clothes reminiscent of his Kingdom Hearts attire, and a crown decorates the sleeves and front of the pants. When in Limit Form, Sora is always in his battle position with his Keyblade at the ready.

In Halloween Town, Sora's clothes remain unchanged aside from the pumpkin mask, which turns into a heart with four triangle with a red and black checker pattern.

In Christmas Town, Sora's Santa hat and the back of his jacket gain a crown.

In Space Paranoids, the panels on Sora's outfit change to the colors of his Kingdom Hearts clothes: red pants and shirt, the inside of the hood blue, black helmet, black breastplate, black shoulder pads, and grey gloves and sleeves. The blue circuit lights and prongs alternate between gold, crimson, black, and gray. His circuit lights and progs can change color depending on his environment, such as the purple light in I/O Tower. His gloves also sport the Limit Form crown.

In Limit Form, Sora's ground and air combos remain unchanged from his normal form, save for his finishers:

While in Limit Form, Sora gains the ability to wield special attacks known as "Limits". Magic is replaced by four Limits: Sonic Rave, Last Arcanum, Strike Raid, and Infinity. Sora's shortcuts are replaced by these limits, unless the slot is already taken up by an item.


Using this Drive Form costs 4 Drive Gauges to activate. Sora can activate Limit Form regardless of the status of his party members, and his party members will only disappear when using a Limit. Like all other Drive Forms, Limit Form's abilities cannot be unequipped, and all action and movement abilities do not carry over to Limit Form. Abilities that affect combos like Combo Plus, Negative Combo, Air Combo Plus, Combo Boost, and Finishing Plus don't affect Limit Form's Limits. All hits of Sora's Limits count as Finish Commands, and can deal the final blow to bosses. Sora gains 1 point toward Antiform every time he transforms into Limit Form.

For each limit command finishing move unleashed in Limit Form, 1 point of experience is gained.

An early spot to level Limit Form is during the Battle of 1000 Heartless in Hollow Bastion. The high amount of enemies will cause Sora's Drive Gauge to refill quickly, making it possible to activate Limit Form several times during the fight.

The best place to level Limit Form is after Sora's second visit to Agrabah in The Cave of Wonders: Treasure Room, where Mushroom V is located. After activating its minigame, use as many limits on the mushroom as possible before Sora's drive gauge depletes to zero. Sonic Rave is the most recommended Limit to use because of it's shorter casting time, and low MP Cost, enabling Sora to use it three times at Maximum MP before MP is depleted. When the drive gauge has almost run out, head to the Chasm of Challenges Save Point to exit to the world map to refill Sora's gauge completely. After the Battle of 1000 Heartless, Mushroom V will become unavailable until after Genie-Jafar is defeated.

Unlike other Drive Forms, Limit Form only allows for Sora's primary Keyblade to be used, with no secondary Keyblade available.