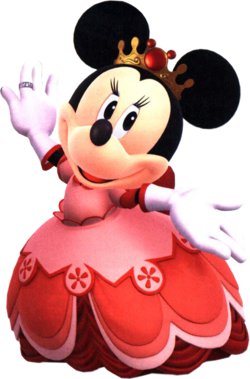 "What really makes someone a hero isn't what they wear or what they say—it's the things they do and how they treat everyone."
Queen Minnie Mouse, Kingdom Hearts Birth by Sleep

Queen Minnie Mouse, often referred to as The Queen, Your Majesty, or Queen Minnie, is the queen of Disney Castle. She often rules during King Mickey's absences. She originates from Walt Disney's 1928 animated cartoon "Plane Crazy."