This article is about the video game character

You may be looking for the secret movie. 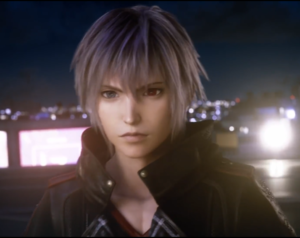 Yozora is a fictional character in the video game Verum Rex.

Right before Sora, Donald, and Goofy first arrive in Toy Box, Rex and Hamm watch a commercial for Verum Rex, featuring Yozora as the main protagonist.[1] Rex remarks that he likes Yozora most.[2] Later, when they actually meet Sora and the gang, Rex and Hamm confuse Sora for Yozora.[3]

At Galaxy Toys, after Sora helps Woody and Buzz find the missing toys, they learn that Rex has gone to the video game store to play Verum Rex, hoping to prove to Buzz that Sora can be trusted, as Rex still confuses Sora for Yozora.[4] Once Sora and the others arrive in the store, they see a poster for Verum Rex and while Sora seems to see a similarity between himself and Yozora, Donald mentions that Yozora looks more like Riku. Later, after Young Xehanort sends a Marionette to control Buzz, he casts Sora into a demo for Verum Rex, and notes that Sora is a video game character in the world, referring to his similarity to Yozora.[5][6]

Sometime after the defeat of Xehanort, Yozora sits high above a city at night, watching as Riku walks through the streets.[7]

Yozora finds Sora in a dark world, and is confused at Sora's seemingly instant recognition of him. When Sora reaffirms his own identity as Sora, Yozora challenges him, explaining that after accidentally wandering into the world, he had faced several trials and was then tasked with saving Sora. Shocked, Sora summons his Keyblade to fight him.[8]

After Sora defeats Yozora, Yozora wonders aloud whether his powers are unneeded yet, and begins to fade away. He tells Sora to not mind what he says, as he disappears amidst a bright light.[9]

Yozora awakens in a car to the sound of someone calling him "Commander." He begins to think about the weird thoughts he's had lately, and wonders to himself if any of it is real or not.[9]

Yozora's name is derived from the Japanese word for "night sky".