Heart Within a Heart 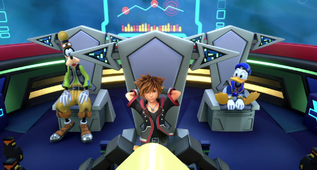 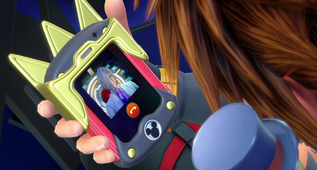 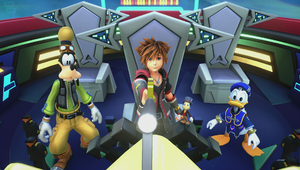 "Heart Within a Heart" is a cutscene in Kingdom Hearts III. It shows Sora, Donald, and Goofy contemplating where to travel next in the Gummi Ship.

Inside the Gummi Ship, Goofy and Donald are waiting for Sora to set their next path of travel when they are interrupted by a strange ringing sound. Sora pulls a device from the pocket of his new outfit and, confused, presses a button on the front. Dale and then Chip appear on the device's screen, revealing what Sora holds is a Gummiphone, something they created so they could keep in touch with Sora on his travels. They have called to tell Sora about some of Ansem the Wise's data that Riku discovered during their time in sleeping worlds.

The conversation is joined by Ienzo, who introduces himself and Aeleus to Sora, with an explanation that by defeating their Nobodies, Sora has "recompleted" them, allowing them to work against Xehanort, who they now know was deceiving them. Ienzo has been examining the data Riku found, and informs Sora that they have learnt that Sora's heart doesn't completely belong to him. To the other's surprise, Sora is not shocked by the information, for he has suspected Roxas was inside his heart for some while. Intrigued, Ienzo signs off to continue his investigations, while Chip and Dale give a cheery farewell and the promise of help should the others ever need it.

Thinking about this new information, Sora decides the best way to know where to go is by following Roxas' heart. With encouragement from Donald and Goofy, Sora summons his Keyblade and opens a gate to their next destination.

Fade in on the blue and green swirling vortex of the space between worlds. The Gummi Ship is sitting idle in the air. Cut to a front view of the ship, the camera panning slowly up to the bubble at the top that houses the cockpit. Cut to inside the cockpit, where Sora leans back in the captain's chair, humming in thought. Jiminy stands on his armrest, watching Sora intently. Donald and Goofy have their own individual seats behind Sora's.

Donald Duck: "Okay, where to?"

Donald Duck: "Oh, come on. Would you get serious?"

Sora: "Gimme a break, okay? I told you. These things take time."

Goofy: "Gawrsh, is it just me, or is this turning into a routine?"

Jiminy, who is positioned next to Sora's leg, cups his ear. He listens for a moment and then jumps to face Sora.

Jiminy Cricket: "It's comin' from you, Sora!"

With a "Huh?", Sora reaches into his back pocket and pulls out a strange device. On the device's screen is the buzzing icon of a ringing phone, with green answer and red dismiss buttons underneath.

Donald and Goofy raise from their seats and move to Sora's side. Sora lifts the device to his ear, then shakes it up and down.

Sora examines the device, then pushes the green button.

The device screen flashes and a video feed of Dale appears. He is standing on a desk in Disney Castle and jumps happily at the sight of Sora.

Sora peers into the device, shocked and confused.

Dale makes some space on the desk and waves off screen.

Chip slides into frame of the device's screen.

Cut to a panning view of Disney Castle's Library. Chip and Dale stand on the desk, talking into a device identical to Sora's.

Dale: "Ya gotta answer the phone, Sora, or we can't give ya updates. We got lots and lots of important stuff we want to tell ya!"

Chip: "That's why we asked Master Yen Sid to make sure you got this Gummiphone we made ya."

Cut back to the view of the phone in Sora's hand.

Chip: "So we'd be able to stay in touch with you at all times."

Dale leans forward, shaping his hands into a square and wiggling his top finger in a clicking motion.

Dale: "And it takes pictures."

Jiminy Cricket: "Oh! You finally finished it. Say, with this Gummiphone, we can talk to each other across worlds. In fact, I might even try writing my journal on it."

Sora: "Wow! Sounds like it's pretty handy, guys. So, what's so important?"

Cut to a view from behind Chip and Dale, looking into their screen and the video feed of Sora.

Chip: "This! Back when you and Riku quested through the Sleeping Worlds, Riku recovered some secret research data that Ansem the Wise hid inside you."

Cut back to the view of the phone in Sora's hand.

Chip: "Mm-hmm. We've been workin' our tails off tryin' to crack it and see what it says."

The device screen flashes and a new feed takes over: Ienzo, standing in the Radiant Garden Computer Room.

Ienzo: "The data has been encrypted, so we've only deciphered some of it."

Sora, Donald, and Goofy pull away from the phone.

Cut to Ienzo in Radiant Garden, talking into his own Gummiphone.

Ienzo: "Oh... I guess we haven't spoken since the castle."

Clomping footsteps can be heard before Aeleus walks onto screen, crossing behind Ienzo.

At the mention of his name, Aeleus looks over at Ienzo and narrows his eyes bitterly at the phone. He turns away and Ienzo calls to him.

Ienzo: "Aeleus, whatever's between you and Roxas, it's in the past."

Aeleus walks off screen, still angry. Ienzo sighs and turns back to the phone.

Ienzo: "Sora, the reason we're here is because you and your friends defeated our Nobodies, thereby "recompleting" us."

Return to the cockpit, viewing Sora, Donald, and Goofy from above as they watch the phone.

Ienzo: "We cast off our hearts by choice, make no mistake, but we didn't know that Xemnas--or rather, Xehanort--was deceiving us."

Cut to a panning upward shot of Ienzo.

Ienzo: "Not anymore. Xemnas and Xehanort have no hold over us now."

Cut to a shot of Donald, scowling intently at the phone.

Ienzo: "exactly the same as we were before all of this began."

Donald throws his hands up and stomps his foot.

Cut back to showing the whole cockpit. With a long "Hmmm", Goofy scratches his head.

Goofy: "But ya know, now that I think about it, Axel's on our side now."

With a disapproving "Ah", Donald crosses his arms.

Ienzo: "We have friends we want to bring back to this world, just the same as you. To do that, we have to work together."

Cut to show Ienzo leaning over a large computer. As he uses the control pad, images of Sora appear on the computer screen.

Ienzo: "In that spirit, Sora...we found some intriguing data in the bit of code we deciphered."

Ienzo: "Yes. In order to piece your memories back together, our teacher, Ansem the Wise, took a close look at your heart. And what he found..."

Half of the image of Sora on the computer begins to pulse brightly. Multiple red boxes start to pop up all over the screen.

Ienzo: "is that your heart doesn't belong just to you."

Back inside the Gummi Ship, Donald, Goofy, and Jiminy jump in surprise.

Goofy looks to Sora, who is staring at the phone with a blank expression.

Sora: "Yeah. Honestly, I suspected as much. There's another heart inside mine. I think it's Roxas's. Just like Naminé is still inside Kairi's."

Ienzo: "Interesting... Well, no one knows your heart better than you."

A shot of Ienzo's hand resting on the computer desk, his finger tapping thoughtfully.

Ienzo: "To be honest, we still have a plethora of questions on our side, but...the idea has merit. It's incredible enough that you and your Nobody are able to coexist. If you share a heart..."

The computer screen is shown again, one of the red boxes running through an endless scroll of information.

Ienzo: "no wonder someone as remarkable as you caught Ansem the Wise's eye."

Cut back to Sora's view of the phone.

Ienzo: "We'll keep investigating based on your hypothesis. I'll be in touch."

The phone screen blinks and Ienzo's feed disappears, to be replaced by Chip and Dale.

Dale: "Okeydokey, we'll give you fellas a ring if there's anything else. Remember, me and Chip, the guys at Radiant Garden, and King Mickey and everybody are never far away."

Chip: "And Jiminy, would ya do us a favor? Teach Sora how to use the Gummiphone."

Jiminy Cricket: "Leave it to me."

The call ends, blinking the phone screen back to black. Sora lowers his arm sullenly. Jiminy jumps down from his shoulder.

Sora: "I have to find Roxas and save him. The others are following Aqua's heart,"

Sora looks up, rejuvenated with a smile.

With hums of support, Donald, Goofy, and then Jiminy nod.

Goofy: "Trust the guidance that your heart gives ya, Sora. That's what Master Yen Sid said."

Donald Duck: "Where to?"

Sora turns to Donald and chuckles.

Sora stand and holds out his arm. His Keyblade materializes in his hand. With a flourish, he points it at the windshield and a brilliant flash erupts from the tip, filling the screen with white. The screen fades back in on the logo for Kingdom Hearts III. After a moment, the screen fades to black.

Heart Within a Heart
Retrieved from "https://www.khdatabase.com/index.php?title=Transcript:Kingdom_Hearts_III/KINGDOM_HEARTS_III/Heart_Within_a_Heart&oldid=18657"