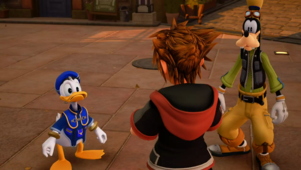 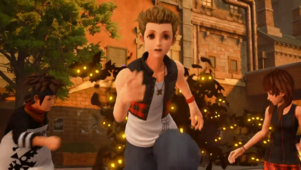 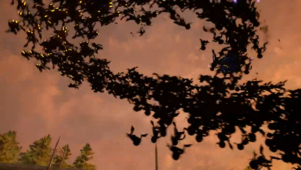 "Hello, Good-bye" is a cutscene in Kingdom Hearts III. It shows Sora, Donald, and Goofy crossing paths with Hayner, Pence, and Olette during a Heartless attack.

Having defeated the Nobodies, Sora is able to wonder aloud what the voice he heard before the ambush was. He isn't given any further time to think as Hayner, Pence, and then Olette appear, rushing through the streets to get away from the massive Heartless Demon Tide behind them. Sora, Donald, and Goofy jump to their rescue.

Fade in on Sora, his arms crossed. The camera pans down to show Donald and Goofy standing in front of him.

Goofy: "You sure it wasn't the wind? Or somethin' else?"

At the sound of a voice off-screen, Sora lifts his head with a curious "Huh?".

At the addition of a second voice, Sora unfolds his arms with a surprised "Huh".

Goofy scratches his head. He and Donald look at Sora with confused frowns.

Sora spins around and the camera follows. Hayner, Pence, and Olette run on-screen, around the corner of a building not far away from Sora, Donald, and Goofy. They're sprinting, panting, and constantly throwing harried looks over their shoulders.

Around the same corner Hayner, Pence, and Olette cleared, a massive swarm of Shadow Heartless appears. The Shadows are traveling in unison, a monstrous wave-like formation known as a Demon Tide. Sora gasps, Donald squawks, and both they and Goofy jump at the sight of the Heartless.

Hayner, Pence, and Olette are still running, their panting getting more frantic as the Demon Tide gets closer and closer. Hayner looks ahead and raises his arm in a wave.

Hayner reaches Sora, raises a hand in greeting, and continues running past, Olette and Pence hot on his heels.

Sora hums surprised as he watches them pass, then summons his Keyblade and moves to a battle stance. Behind him, Donald and Goofy also summon their weapons.

The Demon Tide cuts in front of Sora then swirls upwards, spiraling into the sky. The camera zooms out and a battle begins.