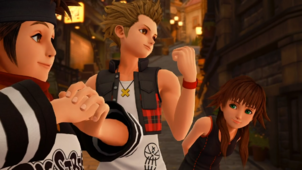 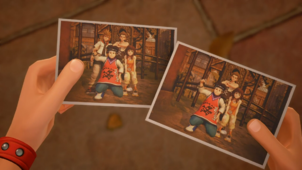 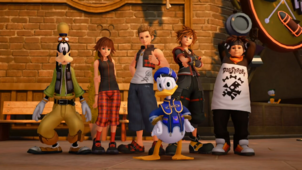 "The Friend They'd Never Met" is a cutscene in Kingdom Hearts III. It shows Sora, Donald, and Goofy reuniting with Hayner, Pence, and Olette and learning about Lucky Emblems.

Before separating, the group take a photo together with Sora's Gummiphone, which leads to his first discovery of a Lucky Emblem.

Fade in on Sora, standing in the Tram Common streets. He turns around to face Hayner, Pence, and Olette as they walk on-screen behind him. Hayner grunts and swings one arm back and forth. He, Olette, and Pence stop before Sora.

Hayner: "What? It hasn't been that long."

Donald and Goofy walk to Sora's side.

Pence: "So does this mean that weird stuff's going down again?"

Hayner: "You kidding, Pence? When have we ever seen a tornado of shadowy blobs before? It's not "weird." This is underprecedented."

Pence lifts a hand to his chin in thought.

Pence: "Hmm, I guess it is. The creatures from the last time were bright white. These things must be new."

Holding his arms in front of his chest. Pence slams his right fist into his left palm, excited.

Beside Pence, Hayner is posed with a fist clenched in front of his face. Beside Hayner, Olette leans forward to address the both of them.

Hayner and Pence relax out of their poses.

Olette: "Whatever's going on, you wouldn't be here unless you had a good reason."

Hayner grunts and lifts a hand to his chin.

Hayner: "but the name sounds familiar."

Pence: "Maybe we bumped into him somewhere."

Goofy: "Actually, he mighta been friends with another version of ya."

Goofy pulls a photograph from his pants pocket and hands it to Hayner. It's a photo of Hayner, Pence, Olette, and Roxas in front of the Old Mansion. Hayner, Pence, and Olette examine the photograph with shocked expressions.

Pence pulls a photograph from his pants pocket and holds it up next to the photo from Goofy. The pictures are identical except Roxas is missing from the one Pence holds.

Pence: "It's like one of those "spot the differences" puzzles... except really easy. I guess in that town, we're friends with this "Roxas" person."

Hayner: "Sora, let us help you track Roxas down."

Hayner lifts the photo to take a closer look.

Hayner: "Sure, he seems like a pretty cool guy."

Pence: "Great. Then let's all go ask around town. If alternate-us knew Roxas, then maybe alternate-other folks did too."

Olette: "Mm-hmm. Sora, you three should go to the place in the photo. It's the old mansion. The three of us'll cover places in town."

Sora: "Thanks. Oh yeah! I got this phone thingy that takes pictures."

With a "Ha", Sora pulls the Gummiphone from his back pocket.

Sora: "Wanna snap a photo while we're all here?"

The screen fades to black. Fade back in on Sora, laughing and posing with crossed arms. The camera swings across to show Hayner next to him, laughing and giving a thumbs up. On the wall behind Hayner, a symbol that looks a lot like the shape of King Mickey's head can be seen carved into the brick. The camera swings down to show Donald standing in front of Sora and Hayner. With a "Hyah", he poses with his hands on his hips. Cut to a shot of the whole group, Goofy and Olette (with one hand crossed behind her back) to the left of Hayner, and Pence (his hands resting on his head) to the right of Sora. They all pose for a moment before Pence starts, lifting his eyebrows with a "Hmmm?".

Sora and Hayner gasp, then sigh. The screen cuts to black, then returns to show the group again, this time missing Donald and Goofy. Cut to a shot of the Gummiphone, then zoom out to show Donald holding it up to take the picture. He lowers the phone, reveals his deep frown, and groans.

Goofy: "It's okay. I'm sittin' outta the photo with ya, Donald."

Donald Duck: "Then you take the photograph!"

Donald shoves the phone into Goofy's hands and marches back to join the group. With a pointed "Ha!", he returns to his hands on hips pose.

Goofy presses the photo button and the screen cuts to black. Cut to a shot of the Gummiphone screen, which is filled with the photo.

Pence: "Wow, that came out great!"

Cut to show the group huddled around the phone. Olette places a finger on the screen.

Return to the shot of the screen, revealing that Olette is pointing to the wall in the photo where the Mickey-head symbol can be seen.

Olette: "Oh yeah, they are huge right now. Supposedly, these things are hidden all over town. And if you get a picture of them, they'll bring you good luck."

Sora jabs a finger at the screen.

Donald and Goofy lean in excitedly. Goofy gives an "A-hyuck!".

Donald Duck: "Is it the King?"

Olette: "Good luck, because they're not all this easy to find."

Hayner: "Okay, we'd better start asking around. You start by checking out the old mansion. We'll catch up."