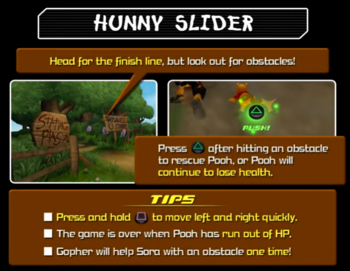 Hunny Slider is an optional mini-game in Kingdom Hearts II.

After Pooh infiltrates and eliminates all of Rabbit's honey, Sora and Pooh are tasked with replenishing Rabbit's supply in order to jog Pooh's memory.

Regardless of how much honey Sora and Pooh collect during the Hunny Slider minigame, Pooh remains unsatiated and fails to remember the identities of Sora, Rabbit, and Eeyore. This is only temporary, as Pooh regains his memories of Rabbit and Eeyore after he gets stuck, and promptly unstuck, in a hole in Rabbit's house.

Sora always has the option to go back to collect more honey for Rabbit, despite knowing the inevitability of Pooh coming back to steal his honey again, only to remain unsatisfied in his efforts.

The first time it's played, Pooh just needs to hold on to his 10 HP to advance the story. When replaying the mini-game, Sora can collect a certain amount of Hunny. For Jiminy's Journal objective, 8000 points are needed.

From "Introduction": "I had written as far as this when Piglet looked up and said in his squeaky voice, "What about Me?" "My dear Piglet," I said, "The whole book is about you." "So it is about Pooh," he squeaked. You see what it is. He is jealous because he thinks Pooh is having a Grand Introduction all to himself. Pooh is the favourite, of course, there's no denying it, but Piglet comes in for a good many things which Pooh misses; because you can't take Pooh to school without everybody knowing it, but Piglet is so small that he slips into a pocket, where it is very comfortable to feel him when you are not quite sure whether twice seven is twelve or twenty-two. Sometimes he slips out and has a good look in the ink-pot, and in this way he has got more education than Pooh, but Pooh doesn't mind. Some have brains, and some haven't, he says and there it is."

From "Chapter 9": ...in which Piglet is entirely surrounded by water": "And it rained and it rained and it rained. Piglet so told himself that never in all his life, and he was goodness knows how old - three, was it, or four?- never had he seen so much rain. Days and days and days. "If only," he thought, as he looked out of the window," I had been in Pooh's house, or Christopher Robin's house or Rabbit's house when it began to rain, then I should have had Company all this time, instead of being here all alone, with nothing"