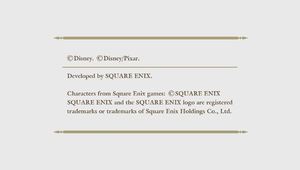 Images and other media files on the Kingdom Hearts Database generally are the copyrighted property of The Walt Disney Company or Square Enix, unless otherwise specified on the file's information page, and are used under fair use guidelines.

In accordance with established guidelines in the Manual of Style and the Media Policy, all uploaded media files must be properly attributed to their source and authors, and the correct license must be selected during upload. Readers who download copyrighted images and other media files from the Kingdom Hearts Database must adhere to the creator's copyrights.

Images and media files violating the Manual of Style and Media policies, including violating the creator's copyrights, may be removed.

This is a summary of the Creative Commons Attribution-ShareAlike 4.0 Interntional (CC BY-SA 4.0) license. This is not a substitute of the license.

All original, written work submitted to the Kingdom Hearts Database is available under the Creative Commons Attribution-ShareAlike 4.0 International (CC BY-SA 4.0) license. Under this license, other editors are free to share and adapt the articles found on the Database, including work added by our volunteer editors, so long as proper attribution to the Database and its contributors is made and the work is made available under the same license and terms.

All contributions to the Kingdom Hearts Database are automatically released under the CC BY-SA 4.0 license. Contributors and editors cannot revoke this license on their contributions. Editors may remove content they add, but they cannot prevent someone from re-adding it, barring any legal reasons and in accordance with the Manual of Style and other site policies.

Plagiarism is strictly prohibited on the Kingdom Hearts Database. If a written work requires attribution, please add it to the article (generally in the References section). Do not copy content to the Database that is written by someone else and is not available under the CC BY-SA 4.0 license or another similar license. Content that violates these rules or copyright laws may be removed.

This article uses material from the "Sora" article on the Kingdom Hearts Database and is licensed under the Creative Commons Attribution-ShareAlike 4.0 International License.

Non-Database content, such as those found in forum discussions, talk pages, and external sites like the Database's Discord server, etc. should not be assumed to be released under this license unless stated.

By using the content on the Kingdom Hearts Database, you agree to adhere to the terms of the CC BY-SA 4.0 license.

The ratings icon is a registered trademark of the Entertainment Software Association.

All other product names, service names, logos and/or company names used on the Kingdom Hearts Database are the registered trademarks, trademarks, and/or copyrighted properties of their respective owners and/or licensors.