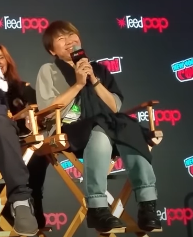 Japanese screenwriter Keiko Nobumoto passed away on December 1, 2021, after battling esophageal cancer.[1] She was the scenario supervisor on the original Kingdom Hearts, responsible for the three storywriters for that game.[2]

Nobumoto was best known for having written the screenplay for several anime titles such as Cowboy Bebop, Tokyo Godfathers, and Macross Plus. She also is known for being the original creator of the series Wolf Rain.

In addition to the scenario supervisor role in Kingdom Hearts, she received a special thanks in the credits to Kingdom Hearts II.[3]