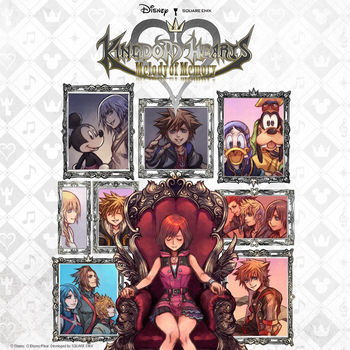 Nintendo of America had a surprise Nintendo Direct this morning and in it, we received new details for Kingdom Hearts Melody of Memory. The game will be released on November 11, 2020 in Japan, with an international release on November 13, 2020. The trailer also went into more detail on the gameplay, which, as expected, will require players to hit the correct buttons timed with the rhythm of songs from the series. The game will feature different modes, including "Memory Dive", which allows to replay stages from past memories, and boss battles against past enemies like Maleficent. Clearing stages unlocks cutscenes from previous games. There will also be online and local multiplayer capabilities, and the Nintendo Switch will have an exclusive "Free for all" mode that features local multiplayer for up to eight players. The game will also feature different play styles and gameplay levels, with more complex combos in the harder levels.[1]

Kingdom Hearts Melody of Memory is now available to pre-order now from the Microsoft Store, Nintendo Game Store, and the Square Enix Store. While it's still not showing up on the PlayStation Store, you can pre-order it for PlayStation 4 from the Square Enix Store and Amazon, and the digital version will feature an exclusive theme. Let us know what songs you hope to hear in the game!