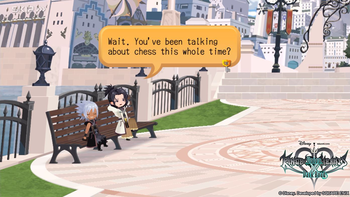 As long expected, and more-or-less known, both Xehanort and Eraqus will be in the game. The game will go into how Xehanort became the seeker of darkness, but also how he and Eraqus became friends. The account also promises to reveal something about one being better at playing games than the other when the game releases.

Square Enix also revealed four new characters that will be joining Xehanort and Eraqus. These characters were teased in the artwork that was released when Dark Road was first teased in January. The four are named Hermod, Urd, Bragi, and Vor. Nothing else was revealed about them in today's announcements.

More information is expected in two days, on June 10. Updates are expected on a regular basis from now until the game releases, though a release date was not revealed.