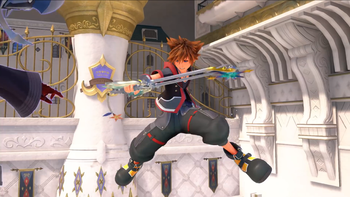 According to the interview, as translated by Mio-chan and Solis[1], staff members at KH13.com, the term "Re:Mind" is a reference to the emails he's received from Square Enix's public relations department, which often are labeled as reminders for him to do something. He specifically notes the word to mean "reminder, reconfirmation, and heart’s regeneration."

Nomura also confirms that the footage from the E3 trailer first shown at the Los Angeles performance of the Kingdom Hearts Orchestra -World of Tres-[2] is exclusively from the Re:Mind scenario, with only one exception. The Oathkeeper Keyblade and Keyblade transformation will be coming in a separate, free DLC. Nomura also reveals that for the Limit Cut scenario, they are aiming to have about as many bosses as were introduced in Kingdom Hearts II Final Mix. The interviewer confirms that number to be thirteen, referring to the Data Organization XIII bosses introduced in the Garden of Assemblage, though it's possible that it will be more than thirteen.

Finally, Nomura reveals that they are aiming to release the episode as soon as possible, with Nomura hoping to release it soon enough to avoid any clashing with the release of Final Fantasy VII Remake, which is set to release on March 3, 2020. As of today, the release of Kingdom Hearts III Re:Mind is only slated as this winter. What are you most excited for in the upcoming DLC?