News:Sora trends for days in lead up to final Smash fighter reveal 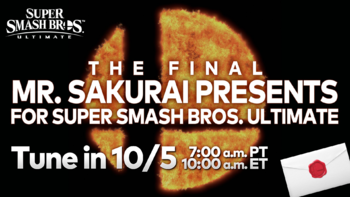 If you have been on the internet lately, Twitter in particular, you may have noticed that Sora has been trending most of the last week or so, and nearly all of the last three days straight. On October 5, 2021, Masahiro Sakurai, the creator and director of the Super Smash Bros. series, will reveal the final fighter in the universally acclaimed 2018 crossover fighting title Super Smash Bros. Ultimate.

Historically, each fighter reveal brings plenty of attention and excitement for fans of the game because, unlike most fighting game series, this series tends to include characters from all parts of video game circles. From Nintendo's renowned characters, like Mario from Super Mario Bros. and Link from The Legend of Zelda to classic icons like Sonic from SEGA's Sonic the Hedgehog, Mega Man from Capcom's Mega Man, and Pikachu from Game Freak's Pokémon, to even modern video game characters such as Isabelle from Nintendo's Animal Crossing, Joker from Atlus's Persona 5, and Steve from Mojang's Minecraft, the series—and this title in particular—plays as an homage to video games generally. Square Enix has three of its own characters in the game as well: Cloud and Sephiroth from Final Fantasy VII and Hero from the Dragon Quest series.

Sora, trending on Twitter at number seven in the United States at time of publication.

The ease with which Sora and the Kingdom Hearts series have been trending over the last couple of days is worth noting, regardless of whether the series is represented in Super Smash Bros. Ultimate or not. For many of us, it is easy to think that the series, while beloved for us, simply is not mainstream or recognizable. Most "regular" people do not think of the Kingdom Hearts series when talking about video games. There are more recognizable franchises all over the place that tend to be the talk of the town. And yet, despite that ignored status the series supposedly carries, Sora has nonetheless been trending on Twitter for the better part of the last week in anticipation of the final fighter reveal. That should be a testament of how much the series has grown over the last several years.

"The Final Mr. Sakurai Presents for Super Smash Bros. Ultimate" will be on October 5, 2021 at 7 AM PDT/10 AM EDT. If the highly-hoped for happens, we'll bring you the latest right here!