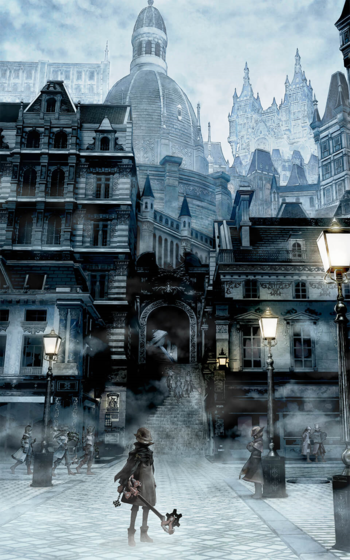 With just two weeks remaining to the year, Square Enix has published the Japanese website for Kingdom Hearts Missing-Link, the upcoming mobile title based on events between Kingdom Hearts Union χ and Kingdom Hearts Dark Road.

The website features a new key art illustration, which features an obscured Keyblade wielder in the middle of a town square in what appears to be Scala ad Caelum. A character that resembles Sigurd can be seen on the right of the artwork.

The website also features details for an upcoming prototype test of the game. Sign-ups are open now until 11:59 PM on Monday, December 26, while the prototype test will take place from January 13 until January 18, 2023. However, the test is limited to users 18 years of age or older who live in Japan, and to devices running iOS 11 or later, the oldest device recommended being the 2017 iPhone 8. A maximum of 1,000 participants will be selected at random from those who sign up. Additionally, Square Enix is warning that the contents of the prototype may differ from the actual game, and progress in the prototype will not transfer to the final release or to other devices. Rather, the test will be limited and focused on testing some game functions, such its ability to use location information. Those who participate in the prototype test will not be able to publish gameplay videos but will be allowed to publish written or verbal summaries and impressions of the game.

It seems Kingdom Hearts Missing-Link may still be some time away from being released. The closed beta was supposed to release this past fall, but instead, a limited prototype will begin next January. In the announcement tweet, series director Tetsuya Nomura appears to suggest this is not the closed beta test announced during the series' 20th Anniversary event in April,[1] and that the official closed beta will be announced at a later date.

If you're in Japan and are interested in signing-up, the Kingdom Hearts Missing-Link website with the details is here: https://www.jp.square-enix.com/kingdom/ml/. Be sure to let us know how it goes!