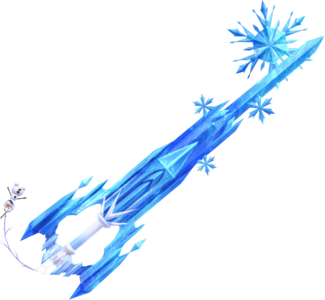 Crystal Snow is a keychain that can be equipped for Sora's Keyblade. Sora acquires the keychain after defeating Sköll in Arendelle.

The Keyblade's design appears similar to Elsa's ice castle in the North Mountain of Arendelle. Much of the blade and hilt are similar in design to the towers that make up the ice castle, while the grip is a mostly-white pillar, featuring a gradient to a light blue towards the pommel. Three snowflakes are scattered across the blade, and a large, intricate snowflake makes up the teeth of the Keyblade. The keychain features a twig with frozen dew, with Olaf featured as the token of the Keyblade.