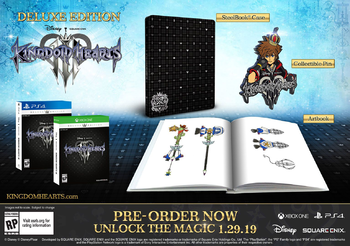 Throughout the day, while trailers for the upcoming Kingdom Hearts III have been dropping left and right, Square Enix has been updating pre-order options and bonuses. So far, there are five different bonuses available for the highly-anticipated title.

There are currently two bundles for pre-ordering Kingdom Hearts III through the Square Enix Online Store in North America and Europe. The first is the Deluxe Edition, which features the game along with a mini artbook featuring concept art for Kingdom Hearts III, a SteelBook© cover, and a limited-edition pin. It costs $79.99 USD. The second is the Deluxe Edition + Bring Arts bundle, which features the same items for the Deluxe Edition, but also features Bring Arts figures for Sora, Donald, and Goofy in their Toy Story forms. It costs $229.99 USD. A physical copy of the game alone is also for sale for $59.99 USD from the Square Enix Store. All three are available from Amazon for the same prices, with the exception of the Bring Arts Figures, which are a Square Enix Store exclusive.

The Microsoft Store features the digital pre-order of Kingdom Hearts III for Xbox One, which features an Xbox-themed Keyblade variant of Star Seeker, for $59.99.

GameStop is offering a fabric poster for pre-ordering the game through the video game store. The title is available for pre-order either digitally or physically, and for either Xbox One or PlayStation 4, for $59.99 USD. In early July, GameStop began it's Twitter campaign to determine which of three different designs should be the fabric poster distributed with their pre-order. The designs are based on Toy Box, Monstropolis, and Arendelle

EB Games in Australia is also selling Kingdom Hearts III. The title alone, for either Xbox One or PlayStation 4, costs $99.95 AUD, and requires a $10.00 AUD deposit. You can also pre-order the Deluxe Edition for either console through them, which includes an EB Games-exclusive Kingdom Hearts III Light-Up Heartless keychain for $139.95 AUD, with a $30.00 deposit required.