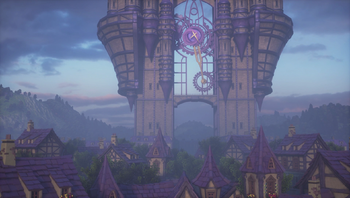 This version of the app, as previously announced, will allow users to watch the entire story from beginning to end via Theater Mode. It will also be possible to customize the playable Keyblade wielder avatar, change Keyblades, view previous records, and play the five minigames from the Classic Kingdom section of the game. The game itself, however, will not be playable as Kingdom Hearts Union χ enters an offline mode that removes all playable quests. Kingdom Hearts Dark Road will be receiving a similar update when the game concludes in September.

Originally released as Kingdom Hearts Unchained χ on September 3, 2015, in Japan, the global version released on April 7, 2016. The game initially served as a retelling of the events of the Keyblade War as depicted in Kingdom Hearts χ. It was later relaunched as Kingdom Hearts Union χ, telling the story of the unnamed Keyblade wielder following the Keyblade War. Despite its inconsistent story updates, frustrations with its gacha-based gameplay mechanics, and the differing content in the global version, the game gained a passionate and devoted following. Efforts have even begun in the community for building a playable, offline version of the game.[2]

The final quest released on the global version of the game on June 9, 2021. The finale met controversy at the time due to its release coming suddenly over a week after the Japanese version of the game. There is still no word on the date for the finale of Kingdom Hearts Dark Road, which will not be playable following today's update.

Maintenance is expected to conclude at 8:00 PM PDT today.[3]