News:Rumors suggest Kingdom Hearts series in the works at Disney+ 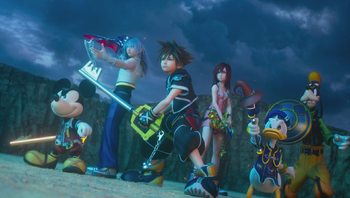 Cue the sitcom laughter. Multiple journalists in the television, film, and general Disney media realms are reporting that a series based on the Kingdom Hearts series is in the works at Disney+. The rumors began about two weeks ago, but took off today when Jeremy Conrad, founder and editor-in-chief at MCU Cosmic, tweeted out a cryptic tweet this morning of a GIF of Sora, Donald, and Goofy performing Trinity from Kingdom Hearts, with only the words "Yes, it's true."

Later in the day, Emre Kaya, news reporter at The Cinema Spot, confirmed the rumors, saying that Disney wanted to make it originally, but is now asking for Square Enix to create a pilot using the Unreal Engine, and that casting is currently underway for the series.

Finally, Skyler Shuler, editor-in-chief at The DisInsider, re-confirmed the previous details, adding that Disney voice actors are expected to reprise their roles, and naming specifically Jim Cummings, Bill Farmer, and Tony Anselmo. Cummings has voiced multiple characters in the series, including Pete, while Farmer voices Goofy and Anselmo voices Donald.

At this time, however, nothing else is known about the series, with no official word from either Square Enix or Disney. We will continue to keep an eye on this and report back with any additional news. In the meantime, let us know what you think!