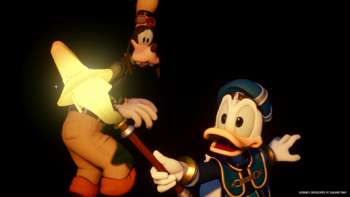 Teased back in January, Square Enix hosted an event today in Tokyo, Japan to celebrate the series' 20th Anniversary. The event featured a public exhibit of artwork, merchandise, and more from the history of the Kingdom Hearts series. There was also a private event afterwards that was filled with major announcements for the future of the series, including the reveal of two new titles! If you missed the exciting news, we've got you covered!

Kingdom Hearts Dark Road now has a new release window. The title, delayed once more in mid-March, will be releasing its final chapter in August 2022.

Kingdom Hearts Dark Road, as previously announced, will remain playable in an offline mode after its final chapter releases. It was original scheduled to release in September 2021, but has been repeatedly delayed since for unexplained reasons.

A closed beta is set to release later this year.

No release date or release consoles have been announced, but the game was revealed to be switching its development to the recently-announced Unreal Engine 5.

You can read Square Enix's press release on the event here: here.

Nomura has commented on the announcements with the tweet below:

We sure are excited for the future of the series! Be sure to follow us for more information! If you are interested in helping cover these and future events, be sure to join us by creating an account and joining our Discord!