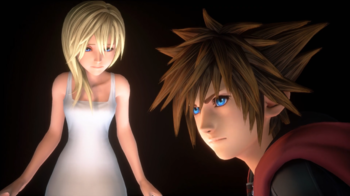 It's been three months since the last trailer announced the Kingdom Hearts III DLC known as Kingdom Hearts III Re Mind, with a release window of this winter. With no news since then (aside from the Famitsu interview shortly thereafter), fans were wondering if we'd have to wait until winter to hear about the next developments. But last week Monday, the Kingdom Hearts twitter announced that a new trailer would be revealed ahead of Tokyo Game Show 2019. And at 11:00AM this morning, they delivered, along with a press release.

This trailer features some additional scenes from the ReMind DLC. It opens with Chirithy saying, "The heart you have now already extisted during that time. It had already gone back into the past. Nothing can change that fact." over Sora and company fighting the tornado of shadows in the Keyblade Graveyard. It then cuts to some of the final fights against the new Organization XIII Axel is shown fighting, with his chakrams, alongside Roxas and Xion against Saïx in the Skein of Severance/Twist of Isolation. Chirithy and Sora talk in The Final World about Kairi's heart. Then the trailer shows Sora fighting against Vanitas in a new Dark Form, wielding Oblivion. Sora's new Ultimate Form is shown again, in a fight against Xigbar. Both the fights against Xigbar and Vanitas take place in a new, unknown area. Aqua and Ventus battle Terra-Xehanort and in the keyblade graveyard, using new a team-coordinated attack, back in the Skein of Severance/Twist of Isolation. Young Xehanort talks to the Master of Masters in the Keyblade Graveyard, Sora talks to Naminé, and the final scene depicts Lingering Will clashing against Terra-Xehanort.[1]

The new press release talks about the DLC contianing new bosses, as well as players confirming the ability to switch characters during the additional battles. A free update will also be released where players can get additional Keyblades [2]

Update 1: Nomura tweets from Kingdom Hearts' twitter account: "I had something simple planned to say but I got nervous just before posting so I am rewriting. The full picture may still be hard to see, but here's a peek of the linkage & Limit Cut. Pls imagine how it fits together. Release date coming soon."[3]

The trailer can be viewed below: