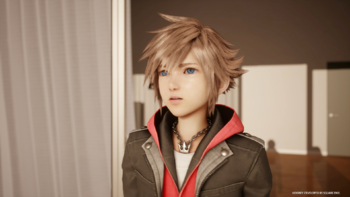 Capping-off the major 20th Anniversary celebration event in Tokyo, Japan, Square Enix and Disney announced the next major title in the Kingdom Hearts series, Kingdom Hearts IV. The title is already in development, with a trailer heralding its reveal.

The trailer begins by showing a mysterious orb of darkness forming in the sky above a city. A forest with a river is seen, followed by the last chess piece featured at the end of Kingdom Hearts III. Sora is then seen sleeping on a couch and waking up to the sound of a doorbell. Sora opens the door to find Strelitzia, a character first introduced in Kingdom Hearts Union χ and long-believed to be deceased following her demise in that game. Strelitzia explains that Sora has been asleep since he arrived seven days prior and introducing him to the world of Quadratum. While it's a world full of life, Strelitzia supposes that it's more of an afterworld with the arrival of both Sora and herself.

The dark orb in the sky, meanwhile, takes form, and appears to resemble a Darkside Heartless as it begins to attack the city. Sora arrives on the scene with the Keyblade and begins to fight the enemy. He appears to use the keychain on the Kingdom Key to zip to the enemy. Sora is also seen sliding inside a building that the enemy attempts to throw at him, appearing on the other side to attack it. The enemy swings its clenched hand at Sora as Sora uses a magic-based attack not yet seen in the series, though Sora's attack resembles the final attack from Ultimate Form from Kingdom Hearts III. Sora then summons a drill-like object, resembling the drill from Favorite Deputy's Drill Punch attack, and launches it at the enemy, causing it to step back. As the battle continues on the street, two hooded figures watch from above before the logo is revealed.

The trailer ends with Donald and Goofy looking in a dark area, Donald lighting the way with his staff, with Donald wondering where someone is and Goofy hoping that the being can help. Behind them, a blue flame appears and someone asks where they are going before the flame appears to turn bright red, causing Donald and Goofy to yell in fear. The trailer ends with the words "Magic in the Making", suggesting the game is now in development.

Check out the screenshots from the game below!

No release date or targeted consoles were revealed. During the event, it was revealed that the game is so far being developed in Unreal Engine 4, but would be switching to Unreal Engine 5.[1]

Are you excited for Kingdom Hearts IV? Be sure to follow us for more information! If you are interested in helping cover these and future events, be sure to join us by creating an account and joining our Discord!