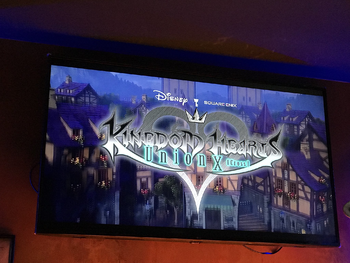 The scene at the event was exciting. The hall at the House of Blues in Anaheim was filled with concept art from Kingdom Hearts Union χ[Cross], including art for medals like the Illustrated KH II Sora & Riku [EX] medal. There were also life-sized storybook sets featuring scenes from Dwarf Woodlands, Beast's Castle, Wonderland, and Agrabah. The stage for the panels themselves featured a large set based on Daybreak Town.

In addition to the beautiful art, the event floor also featured large screens where attendees could play Draw Battles in Kingdom Hearts Union χ[Cross]. A stamp card was distributed to each attendee, requiring stamps from at least five of seven stations in order to receive a special gift: a special set of eight stickers for each world revealed so far in Kingdom Hearts Union χ[Cross]. There was also a large wall for attendees to sign their names and messages on.

The event officially opened with series director Tetsuya Nomura and Shinji Hashimoto taking the stage and revealing a new Kingdom Hearts III trailer. The trailer featured several mini-games that would be a part of the upcoming title. One of them confirmed news from D23 Expo Japan in February that the classic Disney short "Giantland" would be part of the game. The trailer also reveals the return of Hayner, Pence, and Olette in Kingdom Hearts III, sporting brand new outfits.

Nomura revealed that there would be twenty such minigames would be part of the game, all based on various classic Mickey Mouse shorts, and several of those games were playable during the Dandelion Meeting.

Art Director Tatsuya Kando took time to discuss the process of creating medal artwork for Kingdom Hearts Union χ[Cross]. He noted that he first receives a request for a medal, and will try to pose the character or characters in various poses before submitting to feedback. Afterwards, he and his team will go back and revise it, if necessary, before adding the border and effects.

Afterwards, NPC and Character Designer Mayumi Okamoto showed visuals from Kingdom Hearts Mobile's Avatar Kingdom, and explained how the avatar for Sora from that game evolved into the default male avatar design.

Miki Yamashita, the Character and Avatar Designer, showed off designs for Strelitzia and avatar designs from the New Years event in Japan a few months back. Sara Shimokobe, Heartless Designer, showed off several Heartless designs for Kingdom Hearts Union χ[Cross], and the process for designing each one, while Kingdom Hearts Union χ[Cross] and Kingdom Hearts III Keybalde and Heartless Designer Daigo Tsukada showed off both Heartless and Raid Bosses in the game. Finally, Cutscene Designer Megumi Yamamoto showed off scenes from the recent Enchanted Dominion update in Japan that show the process of transforming elements of the original movie (in this case, Sleeping Beauty) into the game, and the challenges from it. As part of the presentation, a cutscene from an future update was shown where the player is trapped in Maleficent's Castle right as Phillip escapes.

The Art and Design panel also featured a short Q&A at the end, which went as follows:[2]

What kind of different designs did the starting keyblade go through before it became "Starlight"? Are there any other original keyblades in the works?
They wanted to embody the feeling of having light, or lux, be the main incorporation for the starting design. It went through several variations and ended up with the keyblade we know and love today!

Have you considered making medals with KHUx characters with a CGI animation attack of some kind?
It has been considered, but there are limitations to having this game be on a smartphone. We don't want to overburden phones with too much special effects, and are happy with the current medal effects.

I think the outfits are too strictly gendered. I understand the idea of separating the boards and outfits for more options and for gender marketing but it’s rather frustrating that a female can’t wear pants and a shirt and a male can’t have a flower crown.
We love that all outfits are desired by both men and women, and will reach out about making future outfits non-gender specific. No promises on this one though!

Was there any stage of development where the game was drastically different than what we see? If so, any stories about different iterations?
Kando-san proceeded to tell a story about how during the initial PC Browser version of the game, cards were used rather than medals. Once the idea to bring it to smartphones was made, medals were re-designed to have more of a magical feel to using them.

Everyone at the event was automatically entered into a drawing for a trip for two to the opening of Toy Story Land at Walt Disney World resort in Orland, Florida. After the winner, Ashley Jimenez, was announced, Union χ[Cross] producer Hironori Okayama announced that there would be an upcoming collaboration event between the launch of Toy Story Land and Kingdom Hearts Union χ[Cross]. The event is to be exclusive to the global version of Union χ[Cross].[2]

Player-vs.-Player mode was shown off during the panel, too, and it was explained that the battles would be three-turn battles with three sets, with the first to win two out of three times wins. The battles, as explained in Development Report #4, would not be live, but more like the current Data Organization battles that just started this week in Union χ[Cross]. Additionally, the 7-star medals that were also mentioned in the developer report were shown off, and while all medals can be evolved to 7 stars, they require specific synthesis items that can only be acquired in the Player-vs.-Player battles. No date for the release of either of these two features were given.

During the panel Q&A, Tetsuya Nomura was asked about the upcoming Union χ[Cross]-exclusive Disney world that was mentioned at D23 Expo Japan. While he didn't give any details, Nomura did say that a character from that world would be a summon in Kingdom Hearts III.

Finally, a new event was announced for Kingdom Hearts Union χ[Cross] that gives a chance to have a random player's name appear within Kingdom Hearts III. This new event would be similar in its result to the "Name-in-a-Game" contest that Square Enix held before the launch of the original Kingdom Hearts in North America, which resulted then with the challenging Kurt Zisa Heartless boss. The event was to be revealed at 9 PM PDT along with the week's weekly in-game notice, in order to be fair to those who didn't attend the event.

The Development panel also had a Q&A segment that is featured below.

How do players in KHUχ carry around their medals?

Are there any worlds that you want to add in KHUχ?

Why is "Guilt" localized as "Special Attack Bonus" (in the English version)?

Are there any collaboration events that you would like to do in the future?

Please tell us about the design and the reasoning behind the appearance of new Union leaders like Ephemera and Skuld.

There sure is a lot of information, and a lot to be excited about for the future of the series! With Kingdom Hearts III coming soon, Nomura promised to be making the trip to the States more often in order to promote its release. The next major event is E3 in June, but who knows, perhaps another trailer or more information is revealed before then. What are you most excited about?