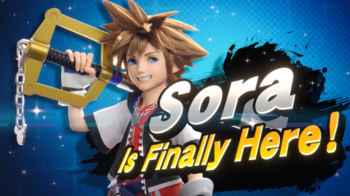 Masahiro Sakurai announced that Sora, the main protagonist of the Kingdom Hearts series, would be a playable fighter in the universally-acclaimed Super Smash Bros. Ultimate. The reveal is the final DLC fighter for the game, and will be available on October 18. Sora's gameplay is largely based on his appearance from the original Kingdom Hearts, but also features costumes from Kingdom Hearts II, Kingdom Hearts 3D: Dream Drop Distance, and Kingdom Hearts III.

Square Enix and Disney revealed a new trailer shortly after the Super Smash Bros. Ultimate presentation in celebration of the 20th Anniversary of the series, which will be this March. The trailer features the previously-announced release of the Kingdom Hearts series on Nintendo Switch, as well as new merchandise that will be available next year. It also teases a celebration event sometime next year, with more information coming soon.

Let us know what you think of today's announcements!