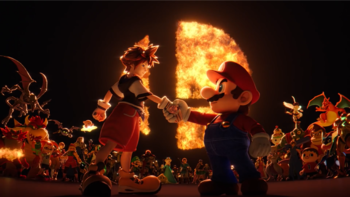 This morning, Super Smash Bros. Ultimate creator and director Masahiro Sakurai announced the final DLC fighter for the universally-acclaimed Super Smash Bros. Ultimate. The title, which released in 2018, is famous for its incorporation of characters from not just Nintendo's franchises, but several other video game titles of all kinds, including Mojang's Minecraft, Atlus's Personal 5, and SEGA's Sonic the Hedgehog. This time, Sakurai announced that Sora from the Kingdom Hearts series will be the final DLC fighter for the game.

The reveal trailer begins with all the revealed characters standing before the burning Smash Bros. logo from the trailer for the game's original release. The burning logo slowly goes out, but a single flame falls. As the logo's flames go out, all of the characters slowly become still and lifeless. Mario, from Nintendo's 1985 classic Super Mario Bros., suddenly opens his eyes and walks forward towards the single flame on the ground. After hesitating, he reaches in and grabs the flame before throwing it in the air. The flame twirls and is revealed to be the Kingdom Key Keyblade, which suddenly blasts a beam of light, revealing a keyhole. The light from the keyhole begins to light the area and the other characters become alive, turning around towards the light. From the keyhole emerges a sleeping Sora, who floats through before suddenly waking and flying around the area before landing on the ground and retrieving his Keyblade. The complete trailer can be viewed below:

Nine tracks from the original game also will be available as part of the DLC: "Night of Fate", "Destiny's Force", "Shrouding Dark Cloud", "Hand in Hand", "Blast Away! -Gummi Ship II-", "Hollow Bastion", "Scherzo di Notte", "Fragments of Sorrow", and "Destati". There's also a re-arranged version of "Hand in Hand", arranged by series composer Yoko Shimomura, that plays as Sora's victory fanfare when he wins matches. In fact, the game slows down during the final hit just as it does in the series when Sora wins. Additionally, those who have save data for Kingdom Hearts Melody of Memory will be able to unlock that game's version of "Dearly Beloved" in Super Smash Bros. Ultimate.

Sora, along with the new stage and songs, are part of Challenger pack 11, and will release on October 18, 2021. Let us know if you'll be playing as Sora in Super Smash Bros. Ultimate!