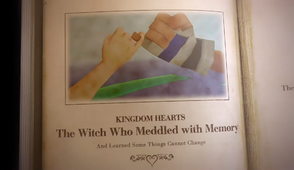 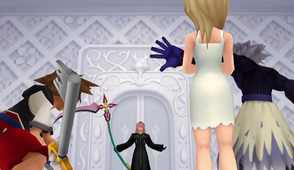 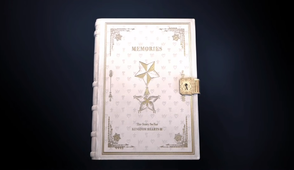 "Episode 2: Memories" is the second cutscene in a five-part video summary of the story of the Dark Seeker Saga. It is made available from the Kingdom Hearts III Main Menu after the Dive to the Heart tutorial is complete. Narrated by Chirithy, it summarizes Sora's journey in Castle Oblivion.

While searching for their friends King Mickey and Riku, Sora, Donald, and Goofy arrive at a mysterious fortress named Castle Oblivion. There they encounter the mysterious Organization XIII, who attempt to manipulate Sora using the powers of a girl named Naminé. Sora races to the top of the castle to save Naminé, unaware that she's the one changing his memories. However, even when he learns the truth, he insists on keeping his promise to protect her.

A silver book floats on screen. A wayfinder charm is embossed on the cover's center. Embossed above the charm is the title "MEMORIES". Below the image are the embossed words "The Story So Far" and, on the line below, "KINGDOM HEARTS III". Chirithy runs onto screen and around the book, while a title in white fades in across the scene:

Chirithy spins on one leg and poses with an arm in the air. The camera zooms in on the padlock on the side of the book, the keyhole of which begins to glow blue as Chirithy starts to narrate.

The book opens and the pages flip before settling on a page featuring a bright watercolor of two hands locked in a pinky promise.

Chirithy: "with the people we love"

The camera zooms in on the title below the picture. It reads:

Chirithy: "our only true connection to them?"

The camera pans across to the next page, which has a line of text in its center:

The promises we make stay with us always.

The page turns and on the next page we see a watercolor of King Mickey holding his Keyblade high as he prepares to seal the Door to Darkness. The camera zooms in on the image and the image becomes a cutscene. We see Sora pushing the door and then Riku smiling as it closes before him.

Chirithy: "Sora, Donald, and Goofy have been searching for King Mickey and Riku, their friends who were stranded on the other side of the door to darkness."

The camera zooms out and the cutscene turns back into a picture in the book. We pan across as the book flips many pages and then zoom in to the image of Castle Oblivion on the next page. We watch Sora start up the road to the castle.

Chirithy: "A clue leads them to a mysterious citadel called Castle Oblivion."

Sora now stands in one of the castle halls, scowling at a black cloaked figure before him.

Sora holds a blue card as the figure gestures to the door ahead.

The figure is swallowed by a dark portal as we return to the book and the page turns. We see a picture of Sora's time in Monstro, but the image is splashed with a liquid that makes it fade away. The page turns and we watch an image of Wonderland disappear the same way, then Hollow Bastion on the page after that.

Chirithy: "Sora is determined to press on and look for his friends. But as he climbs, his most precious memories begin to slip away."

One more page turn and we zoom in on the next picture to see Axel, Larxene, and Vexen in conversation. The three turn as a dark portal opens behind them and the cloaked figure from earlier steps through. He removes his hood to reveal himself as Marluxia.

Chirithy: "He is being tricked by Marluxia and a mysterious Organization who are trying to make him their puppet."

We flash back to the book and a new page featuring a picture of Kairi, her name in large letters above. The picture and title blur away, both being replaced by Naminé.

Chirithy: "Unaware that the events of his past have been rewritten inside his mind,"

We flash back to a cutscene of Sora running through the halls. The scene fades to black and then fades back in to show Naminé, drawing alone in her room.

Chirithy: "Sora races to the top of the castle to save a girl named Naminé."

The cutscene turns into a photo and we return to the book. Another page turn takes us to a picture of Donald and Goofy and we zoom in for the next cutscene. Donald and Goofy look imploringly at Sora, who is standing before a large staircase.

Goofy: "Sora, what happened to ya?"

Sora: "What's that mean? Do you want me to abandon her?"

We return to the book, travel to the next page, then through a picture of Naminé holding her sketchbook.

Chirithy: "But there, he learns the shocking truth."

Naminé is gripping her sketchbook tight, her eyes on the ground as Axel stands at her side.

Naminé: "Even if you come for me—what then?"

Chirithy: "Naminé has special powers, and she's the one who's been changing Sora's memory."

Naminé stands and runs from the room. Axel has his back to her as she leaves.

Naminé stands in a hall, looking ashamed and uncomfortable.

Larxene: "The girl you've been trying to protect all this time...is really a manipulative witch who shackles people's hearts."

Sora stands across from Naminé in a hall.

Sora: "Erase my memories. Destroy my heart. I promised. I'll always protect you. You have to believe me!"

We return to the book, another page turn, and through the next picture. Marluxia stands before Sora, both with their weapons drawn. Riku Replica stands next to Sora, his arms outstretched to shield Naminé, who is huddled behind him.

Marluxia: "You turn from the truth because your heart is weak. You will never defeat me!"

We once again return to the book and hover over the picture of Marluxia posed for battle. Below the image are two lines of text:

Are Sora's most precious memories lost forever? Will he remember his promise to Naminé?

The book closes and spins around to show us the front cover. The padlock locks itself.

Chirithy: "This would be Sora's first encounter with Organization XIII, but certainly not his last."