News:Russi Taylor, long-time voice of Minnie Mouse, passes away at 75 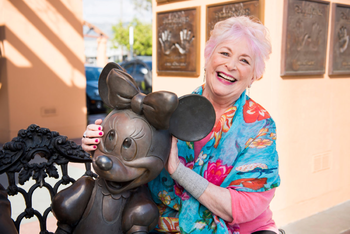 American voice actress Russi Taylor, the long-time voice of Minnie Mouse throughout a multitude of Disney products and features, has died, the Walt Disney Company announced today.[1] She was 75.

Taylor has voiced a multitude of characters throughout her illustrious career, but is best known for her role as Queen Minnie Mouse, a role she reprised across various titles in the Kingdom Hearts series.

Taylor was born on May 4, 1944 in Cambridge, Massachusetts, and began her infamous role as Minnie in 1986, beating out 200 other auditions for the role. In 1991, she married Wayne Allwine, the long-time voice of Mickey Mouse, and they remained together until Allwine's death in 2009.

Of Taylor, Bob Iger, Chairman and Chief Executive Officer of The Walt Disney Company, said, "For more than 30 years, Minnie and Russi worked together to entertain millions around the world—a partnership that made Minnie a global icon and Russi a Disney Legend beloved by fans everywhere. We’re so grateful for Russi’s talent as well as the tremendous spirit and great joy she brought to everything she did."[1]

The news of Russi Taylor's death comes, for Kingdom Hearts fans, on the heels of news that Dutch actor Rutger Hauer, the voice actor for Master Xehanort in Kingdom Hearts III, passed away last week.[2] Taylor becomes the sixth person to have voiced a major character in the Kingdom Hearts series to pass away, which includes Allwine, Hauer, Eddie Carroll (Jiminy Cricket), Leonard Nimoy (Master Xehanort), and Christopher Lee (Ansem the Wise).