The ideas expressed in this article are the express opinion of the author(s), and do not necessarily express the opinion of the Kingdom Hearts Database, its staff, or its contributors collectively.

So what does make a Kingdom Hearts game? Perhaps the correct explanation isn't that it's a union of Disney and Final Fantasy worlds. 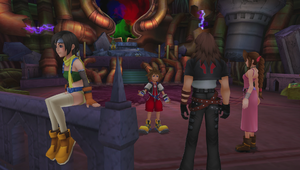 Sora speaks with Leon, Aerith, and Yuffie in Hollow Bastion. Kingdom Hearts is arguably where they played their largest roles in the series.

It's been seven months since the release of Kingdom Hearts III, and there is still talk about what it did right and what it did wrong. While there is plenty of valid criticism, it's important to consider, as we have these discussions, which of our criticisms are indicative of a game that could have been improved versus criticisms based on our own, personal preference. Certainly, Kingdom Hearts III has things it could have done better generally. I've actually mentioned a few of these myself over the last seven months. But there are arguments that are less about the game's actual flaws and more about unfulfilled expectations.

One of the regularly-expressed criticisms is the lack of Final Fantasy characters in the game. Unlike previous entries in the series, there's a notable lack of involvement from Leon, Yuffie, and others. There's no return of Cloud, no conclusion to his fight with Sephiroth, no exploration of Radiant Garden, nothing. I'll admit that I hoped for all of these characters and worlds to be in the game. I've never played a Final Fantasy title (unless you count a couple times in Dissidia Final Fantasy, which I don't), but these characters brought a certain exciting charm and seriousness to the game's overall plot. In the case of Leon and company in Kingdom Hearts II, that element integrates those characters and the related Disney characters, like Stitch and Maleficent, into the general plot well.

A trend of non-existence 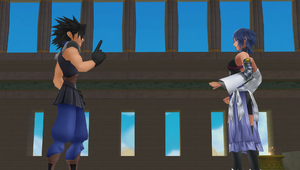 Zack, the only Final Fantasy character in Kingdom Hearts Birth by Sleep, asks Aqua out on a date.

Looking at the series as a whole, the role of characters from the Final Fantasy series (or any Square Enix game, for that matter) has gradually diminished. Kingdom Hearts III is not some sort of turning point for the series; it's a continuation of a trend that began with Kingdom Hearts 358/2 Days and continues to this day.

For seventeen years, when asked to define the Kingdom Hearts series, we fans have often described it as a crossover between Disney and Final Fantasy characters, with Sora, Riku, and the others kinda stuck in the middle of this incredible quagmire of a union. But if you consider the previous points, perhaps that's not really what the Kingdom Hearts series is. There are no Final Fantasy characters in Kingdom Hearts 358/2 Days, giving support to Roxas or Xion during an increasingly difficult conflict with the Organization. They are not to be found helping Data-Sora when he lost the Keyblade. They do not guide Sora or Riku through the realm of sleep, they do not support Aqua in the realm of darkness on her attempted journey home, and we don't visit them after they seemingly completed the restoration of Radiant Garden and, apparently, just let the former members of the Organization just waltz in. Do these realities make any of 358/2 Days, coded, Dream Drop Distance, 0.2 Birth by Sleep, or Kingdom Hearts III any less of a Kingdom Hearts game? Obviously not.

So what does make a Kingdom Hearts game? What is it really? Perhaps the correct explanation isn't that it's a union of Disney and Final Fantasy worlds. Rather, it's probably more correct to define it as a Disney game with Final Fantasy elements. After all, there's nothing Disney about the Keyblade, the series' approach to the heart, or the endlessly-memed zipper and plaid design of Sora, Kairi, and King Mickey's clothing. It's definitely Final Fantasy that inspires much of the gameplay style and the way the story is told, starting with the fact that aside from the Kingdom Hearts series, there aren't a whole lot of Disney role-playing games. Getting rid of  Those are the elements that really make Kingdom Hearts what it is. 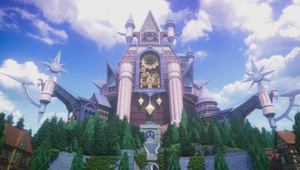 Do not misunderstand. The series still depends on the Final Fantasy series as the inspiration for so much. The combat style, the introduction and design of characters like Yozora, the various magic spells (particularly one Zettaflare), all are a testament to the incredible, powerful, and still relevant influence of the Final Fantasy series. Those elements, found throughout Kingdom Hearts III, are found in some way in every Kingdom Hearts title to date. This union of the world of Disney and the elements from Square Enix titles like Final Fantasy still make the Kingdom Hearts series an incredibly ridiculous, complex, unbelievable, yet perfect union. Removing either of these is precisely what would make any of these titles no longer a Kingdom Hearts game.

I still hope for the return of Leon and the gang to Radiant Garden. I know they're there, and I wish we could see them. I want a story of their past, their flight from Hollow Bastion, and their lives now. And I long for an actual conclusion to the battle between Cloud and Sephiroth. And while I'm disappointed that they're not in Kingdom Hearts III, that doesn't ruin the game or its story for me. It's clear to me that Tetsuya Nomura isn't wrong when he said that the Final Fantasy characters weren't needed anymore. He used them to help bring attention to the games in its early years. Now, heading into the next saga of the series, we find a collection of stories that stand on their own feet, a series of games with characters and a story that can grab attention on its own.