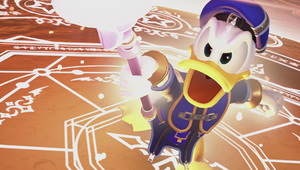 Zettaflare is a powerful magic spell introduced in Kingdom Hearts III. Only Donald Duck has been seen using it.

Terra-Xehanort attempts to attack Kairi and Sora, having already attacked and defeated Ventus and Lea, but his attack is blocked by Goofy. Angered, Donald attacks Terra-Xehanort with Zettaflare, even as Goofy tells him not to. The attack seemingly obliterates Terra-Xehanort, but Donald is knocked unconscious as a result of using the attack.[1]