Come on. It's a tennis joke. Should I've gone with ping-pong?

April Fools!
This article is one of our annual April Fools' Day pranks! Its contents should not be taken seriously, and we make no claim that any of it was ever real. At least, not for now!
Year: 2020
Kingdom Hearts Road to Light

The game will explore the origin of Gummi Ships, Keyblade Gliders, and why Eraqus has a stick up his a**.[2] 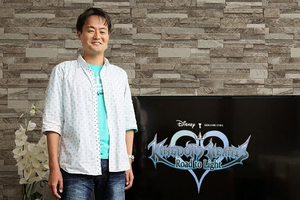 The game was first hinted by series creator Tetsuya Nomura on April 1, 2020. In a recent interview with Dengeki, Nomura announced that it will be developed by the same team that is working on Kingdom Hearts Union χ and Kingdom Hearts Dark Road.[3]

After being summoned by Luxu to the Keyblade Graveyard, the foretellers take a detour to lure Ava and confront her as the traitor. They set up a racing event and invite all the worlds, via the Book of Prophesies, to participate in the Worlds Cup.

Meanwhile, a young Xehanort and Eraqus hear about this event, but their master forbids them from going to the event, due to their Mark of Mastery exam coming up soon. Drawn in by the idea of doing something useful for once in their lives, Xehanort and Eraqus come up with a plan to sneak out of Scala ad Caelum later that night to participate in the race. However, after speaking with their master about Eraqus' "high potential", Eraqus backs out of the plan and decides to stay and take the exam. Seeing that Eraqus didn't meet him and the rendezvous point, Xehanort heads to the race anyway, stealing his master's Keyblade Glider along the way.

By not showing up to the exam, Eraqus gets the title of Keyblade Master by default and his first mission is to retrieve Xehanort and bring him home. After thinking he's better than everyone else because he passed his first test by default, Eraqus finds Xehanort at the races. The two boys get in a heated argument where they determine the only way to possibly decide who is the better person is by Rumble Racing. Before the races begin, Xehanort takes his keyblade and slashes Eraqus in the face, sending him to the hospital with a scar, causing Xehanort win by default.

Meanwhile, Ava is in fact lured by the sweet sound of Rumble Racing, but the event becomes so grand and so much fun that the foretellers completely disregard their roles yet again, and just have fun racing.

The character roster is going to consist of 13 playable characters:[4]

It's a racing game.