"An image of you utilizing your magic to its fullest flows into your mind."
Yen Sid's mirror 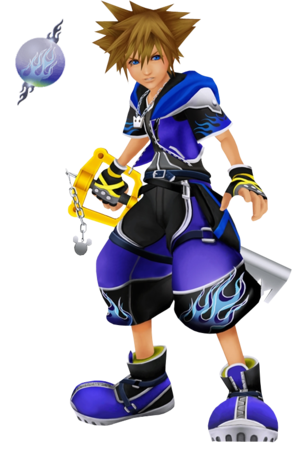 While in most worlds, Wisdom Form turns Sora's clothes turn blue and a blue flame decorates the sleeves and front of the pants. Blue sparkles twinkle around Sora's feet while two blue whisps swirl around his body and, while moving, the particle effects trail behind him.

In the PlayStation 2 release of Kingdom Hearts II, the sleeves mistakenly have the saltire emblem from the Master Form outfit, despite the official artwork showing the sleeves with the blue flames. This was fixed in all future releases.

In Christmas Town, the back of Sora's coat and Santa hat gain a blue flame. [KH II FM]

In Wisdom Form, Sora has the ability to shoot magic bullets in lieu of attacking, slide across the ground and combo magic faster than in his original form. His ground combo consists of two parts:

His aerial combo is only a three round burst of magic bullets that keep Sora suspended in midair. This is unaffected by Air Combo Plus and Finishing Plus abilities, similar to how magic is unaffected by such abilities.


Other than combo finishers, magic mostly stays the same when in Wisdom Form. However, Fire propels Sora forward, and Blizzard pushes Sora backward.

Using this Drive Form costs 3 Drive Gauges and the use of Donald until Sora has reverted back to his original form. If Donald is unconscious or not in the party, Wisdom Form will be unusable--with the exception of the Cerberus Cup, Cerberus Paradox Cup, and rounds 31-40 of the Hades Paradox Cup. Physical attacks are unusable during Wisdom Form's duration, and guarding is limited to Reflect magic. Like all other Drive Forms, Wisdom Form's abilities cannot be unequipped, all action and movement abilities do not carry over to Wisdom Form. Sora gains 1 point toward Antiform every time he transforms into Wisdom Form, and his points restart at 0 when Wisdom Form is first obtained.

For each Heartless defeated in Wisdom Form, 1 point of experience is gained. This means areas with many weaker Heartless such as Shadows and Hook Bats are best for leveling.

While early in the game, the best place to go to level is in the Land of Dragons. Start from the Save Point in the Village and head up to the Ridge and Summit. There's quite a few Shadows and Rapid Thrusters that both have low health, thus making them easy targets. Then return to save point in the Village to exit to the world map and restore Sora's gauge before it depletes.

After the Battle of 1000 Heartless, going to Agrabah just outside the Peddler's Shop, there are a lot of Fiery Globes with low HP. Return to save point in the Peddler's Shop to exit to the world map and restore Sora's gauge before it depletes.

Later in the game, Mickey's House in Timeless River is home to many Soldiers and Shadowss. Exit out of the world using the door instead of the save point to restore Sora's gauge before it depletes.

"KINGDOM HEARTS II (2005)This form lets Sora specialize in magic and glide quickly along the ground."

"Strike continuously attacks far enemies in a forward direction with magic bullets. Use Judgment to attack all nearby enemies at once! Execute the attacks quickly, or the limit will be canceled!""
Jiminy's Journal, Kingdom Hearts II 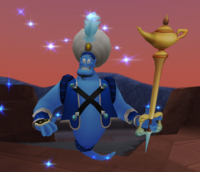 In Kingdom Hearts II, Genie can mimic Sora's Wisdom Form. In his Wisdom Form, Genie gains a white turban with a pink gem with a silver outline beneath a yellow feather on the front. Below the gem is a black headband with silver borders. His golden shackles loosen a bit, turn red, and gain white, buttoned straps at both the top and bottom of the shackle. The shackle is tied by two gold, crossed laces. Genie also dons a blue jacket with short, black, puffy, sleeves with a blue tint. The jacket has two black straps that cross in the middle. These are connected by blue buttons with silver arrow-shaped boarders that point along the straps. The beginning of Genie's tail also dons a black, puffy sleeve that matches the ones on his arms. The end of his tail turns into a Keyblade-like weapon, which has a fading gradient from Genie's blue tail to a bright gold toward the teeth of the Keyblade. The Keyblade is a long cylinder with a swirly-shaped hilt, brown handle, and teeth in the shape of the magic lamp.

When in Wisdom Form, Genie can use an ability called "Strike Raid". Selecting "Strike" in the menu causes Genie to shoot magic bullets from his fingers, shooting enemies in front of Sora, as Sora holds onto his tail. Using the "Judgement" reaction command lets Sora spin Genie around from his tail, while Genie continues to shoot magic bullets from his fingers. Genie gains the ability to transform into Wisdom Form as soon as Sora does.