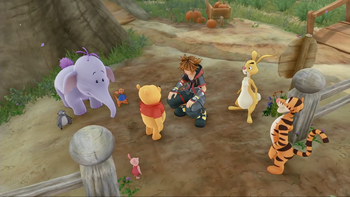 On Saturday, during Microsoft's special X018 episode of Inside Xbox, Square Enix showcased a brand new trailer for Kingdom Hearts III. The new trailer features scenes from Kingdom of Corona, The Caribbean, and San Fransokyo, as well as scenes from a newly-announced, familiar world, the 100 Acre Wood! The short minute-thirty-second trailer is packed with new information and details for Kingdom Hearts III!

Opening: Kingdom of Corona, 100 Acre Wood, and The Caribbean cutscenes

The trailer begins featuring an iconic scene from Disney's Tangled, showing Rapunzel and Flynn Rider on a boat in the sea as they see the lanterns of light floating around them. Sora, Donald Duck, and Goofy are then seen marveling at the floating lanterns from the dock. Certain details are more pronounced than in the scene from the movie, particularly the design on the lanterns. The trailer then shows a scene from the 100 Acre Wood, with returning characters Rabbit, Tigger, Roo, Gopher, Piglet, and, of course, Winnie the Pooh, as well as a new character, a Heffalump similar in appearance to Lumpy from Pooh's Heffalump Movie. Pooh expresses his desire to have Sora stay with them forever, and Sora replies by telling him that he'll always be with Pooh in his heart. The art style in this world is notably different, with the characters noticeably outlined in black. This appears to be a nod to the storybook-like art style of the Winnie the Pooh storybooks.

The trailer then transitions to a scene that shows Hayner and Pence confront Ansem, Seeker of Darkness, with the former jumping to kick Ansem from behind. The scene cuts with Hayner in the air, his foot about to hit Ansem. A conversation then is shown between Demyx and Vexen, where Demyx remarks his reluctance to fight and notes that he and Vexen are not friends. Next, a conversation is shown between Sora and Chirithy in an unknown location that features clouds and seems to show them both standing on a glass-like platform. Sora tells Chirithy that he'll be back to visit, remarking that they're friends now. An iconic scene from Pirates of the Caribbean: At World's End is then shown, featuring Captain Jack Sparrow fighting Davy Jones high on one of the sails for the chest, presumably containing Jones's heart as it did in the movie. While Davy Jones demands that Jack hand over the chest, Jack taunts him by asking if he wants to surrender.

A scene from San Fransokyo then is shown, with Hiro heard saying that his brother Tadashi wouldn't want there to be a Baymax that hurts people, with Sora then hopping on Baymax to chase down the dark Baymax. Some gameplay is then shown of Sora and Baymax using Intercept Jet to fight the dark Baymax. Gameplay featuring some of the puzzles from the 100 Acre Wood is then shown. As Executive Producer Shinji Hashimoto explained during the X018 conference, the 100 Acre Wood will feature more puzzle-like minigames to compliment the other minigames already set for the game like Classic Kingdom and Remy's cooking minigame. A new attack is shown, featuring Rapunzel and Flynn Rider capturing Sora, Donald, and Goofy in Rapunzel's hair and then swinging them around, hitting enemies in the process, though the attack is unnamed. Next, an attack with Sora and Jack Sparrow is shown off, called "Never Fear", which features Jack throwing several bombs in the air and he and Sora then striking them with their weapons, sending them into the air towards enemies. It remains unclear if these two new Limit-like attacks, along with Intercept Jet, will be related to the new link attacks. A new Keyblade transformation, called "Hunny Launcher", is also shown, which has Sora launch globs of honey at enemies. The last segment of gameplay features Sora running in an unknown location in the sky, the ground of a translucent glass-like appearance, with multiple other Soras running around and on the walls. Sora is shown running into the various doppelgangers, which disappear on contact.

Towards the end of the trailer, the beginning of a battle begins, with Sora remarking how many enemies there are. Shown getting ready to fight are Donald and Goofy, then Lea and Kairi, and finally, King Mickey and Riku, before returning to Sora, Donald, and Goofy as they prepare to face countless Heartless, Nobodies, and Unversed. Only the Shadows and Dusks are returning in this scene from past games, while the remainder of the group of enemies including a giant crab-like Unversed, some sort of flying soldier-like Heartless, and the scythe-wielding Nobodies from the previous Lucca trailer. The next scene shows what appears to be a battle between Terra-Xehanort and the Lingering Will, with the former angrily asking for the identity of the latter.

The final scene features the Organization in a desert-like area in similar appearance to the Keyblade Graveyard. Dozens of Keyblades fall from the sky as a structure rises from the ground, on which the Organization is standing. The structure seems to have a similar design to the one Roxas stands in front of at the end of the Tokyo Game Show trailer, though Roxas is not shown. The entire Organization is shown, hooded, with only Master Xehanort visible at the center of the group, later seen rising on his own pillar of rock above the rest, as he proclaims the time to forge the "ultimate key... the χ-blade" has come. The trailer then ends with the release date.

This new trailer features the voices of both Demyx and Master Xehanort for the first time, as well as Winnie the Pooh and Terra-Xehanort, who see their trailer debut for the game here. Additionally, it marks the first time we also hear Hiro, Davy Jones, and Hayner in English.

Shortly after the new trailer premiered at X018, Tetsuya Nomura revealed on the Japanese Kingdom Hearts Twitter account that there would be another trailer releasing later this month, and additional trailers would be releasing in December in preparation for its release in January, just two and a half months from now. What did you think of the new trailer?