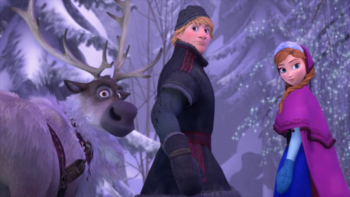 The new trailer begins by introducing the newest world to the Kingdom Hearts, Disney's successful 2013 film Frozen. Sora, Donald, and Goofy show up just as Elsa runs away from a quickly-freezing castle. It then cuts to a scene where Sora and the gang catch up to Anna, Kristoff, Sven, and Olaf. Scenes of gameplay from the area are then shown off, including a particular "Goofy Curling" where the gang slides on Goofy's shield.

A new Simba link is shown off as well as the Ralph link from last month's Kingdom Hearts III Premiere Invitation event, and a new Attraction attack. Finally, the trailer shows off gameplay sequences from the Gummi ship battles, showing off the new open-world style gameplay.

The second half of the trailer becomes more somber. Elsa begins by explaining she can't return to her home. The next scene shows Hercules struggling to keep up a crumbling building. More scenes are shown off from the Monsters, Inc. world, Toy Box, Olympus, and the new Arendelle. Larxene is revealed to be back, this time as part of the new Organization XIII, and plotting to make Elsa turn to the darkness. Finally, the trailer ends showing the chilling fate of Aqua, whom King Mickey and Riku have been tasked to rescue from the Realm of Darkness.

The trailer itself is a surprise, as there wasn't a lot of expectation for a new trailer during Xbox's conference. The trailer show's Square Enix's commitment to releasing the highly-anticipated Kingdom Hearts title to he Xbox One as well as the PlayStation 4. It's also expected to be only the first of several upcoming trailers this week as E3 kicks off. What's your favorite part of the newest trailer?