"An image of you utilizing your strength to its fullest flows into your mind."
Yen Sid's mirror 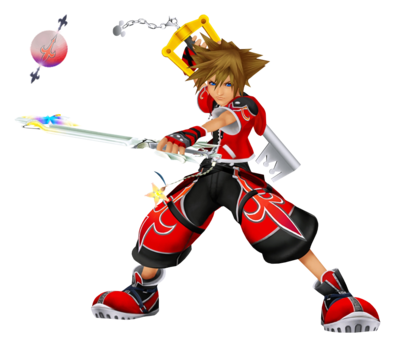 Valor Form (ブレイヴフォーム, Bureivu Fōmu?, lit. "Brave Form") is the first of Sora's Drive Forms in Kingdom Hearts II, which specializes in physical attacks. Sora gains Valor Form from Flora, Fauna, and Merryweather in the Mysterious Tower after waking up in Twilight Town.

In most worlds, Valor Form makes Sora's clothes turn red and a Fluer-de-lis decorates the sleeves and front of the pants. Red electricity zaps around Sora's hands and, while running, red flakes of light fly off of his hands and fly behind him as he runs. Sora shifts his weight to his toes, and taps his heel when not in motion. He also slightly bends forward at the waist, and down at the knees. He holds his primary Keyblade in his right hand behind him across his shoulders, and holds his secondary Keyblade in his left hand at his right side. When walking, he shuffles sideways. When running, he bends lower at the waist. Unlike his usual form, his stature isn't dependent on whether or not enemies are present.

In Halloween Town, Sora's clothes remain unchanged but the pumpkin mask turns into a red bomb enemy design combined with a fleur-de-lis.

In Christmas Town, the back of Sora's coat, and the Santa hat gain a red Fluer-de-lis. [KH II FM]

"With Goofy's help, use the Drive Command to change into Valor Form."

In Valor Form, Sora has the ability to wield two Keyblades, run much faster and jump much higher than in his original form. His ground combo consists of three parts:

Using this Drive Form costs 3 Drive Gauges and the use of Goofy until Sora has reverted back to his original form. If Goofy is unconscious, not in the party, or both, Valor Form will be unusable--with the exception of the Cerberus Cup, Cerberus Paradox Cup, and rounds 31-40 of the Hades Paradox Cup. Magic is unusable during Valor Form's duration, so healing is limited to items, save points and relying on party members. All action and movement abilities do not carry over to Valor Form. Like all other Drive Forms, Valor Form's abilities cannot be unequipped. Sora gains 1 point toward Antiform every time he transforms into Valor Form, and his points restart at 0 when Valor Form is first obtained.

For each attack dealt to the enemy in Valor Form, 1 point of experience is gained. This means that enemies that can take a lot of hits, such as bosses, Morning Stars, Crimson Jazzes, and invulnerable Undead Pirates, are the best targets for Valor Form. Attacking environmental objects won't count toward leveling Valor Form. In the original, Japanese version of the PlayStation 2 release of Kingdom Hearts II, if Sora hit enemies with the skateboard while in Valor Form, then those hits would count toward levelling Valor Form. However, this feature was removed in all future releases.

While early in the game, the best place to go to level is in the Village Cave in the Land of Dragons. There is an Assult Rider with a few Rapid Thrusters in the cave. After defeating the Assault Rider, leave the Village Cave and head to the nearest Save Point to exit to the world map and restore Sora's gauge before it depletes.

Later in the game, enemies with higher HP, such as the Crimson Jazz and Morning Star heartless, which also drop lots of Drive Orbs, are good to use to level Valor Form.

Kingdom Hearts II Final Mix has an additional strategy. After Sora's first visit to Agrabah, the best place to go is the The Cave of Wonders: Treasure Room where Mushroom V is located. After activating its minigame, get as many hits on the mushroom as possible before Sora's drive gauge depletes to zero. When the drive gauge has almost run out, head to the Chasm of Challenges Save Point to exit to the world map to refill Sora's gauge completely. After the Battle of 1000 Heartless, Mushroom V will become unavailable until after Genie-Jafar is defeated.

"Sonic continuously attacks close enemies in front. Follow it with Rave for big damage. Execute the attacks quickly, or the limit will be canceled!""
Jiminy's Journal, Kingdom Hearts II 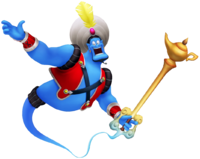 In Kingdom Hearts II, Genie can mimic Sora's Valor Form. In his Valor Form, Genie gains a white turban with a gold gem with a silver outline beneath a blue feather on the front. Below the gem is a blue headband with silver borders. His golden shackles loosen a bit, turn blue, and gain white, buttoned straps at both the top and bottom of the shackle. The shackle is tied by two brown, crossed laces. Genie also dons a blue jacket with short, black, puffy, sleeves. The jacket has two black straps that cross in the middle. These are connected by yellow buttons with silver arrow-shaped boarders that point along the straps. The beginning of Genie's tail also dons a black, puffy sleeve that matches the ones on his arms. The end of his tail turns into a Keyblade-like weapon, which has a fading gradient from Genie's blue tail to a bright gold toward the teeth of the Keyblade. The Keyblade is a long cylinder with a swirly-shaped hilt, brown handle, and teeth in the shape of the magic lamp.

When in Valor Form, Genie can use an ability called "Sonic Rave". Selecting "Sonic" in the menu causes him to turn into a giant hand, smacking enemies in front of Sora, as Sora flails him around. Using the "Rave" reaction command lets Sora charge at enemies in front of him, while riding on Genie's hand. Genie gains the ability to transform into Valor Form as soon as Sora does. In Kingdom Hearts Unchained χ/Union χ, this form of genie appears as a medal titled "Valor Genie".